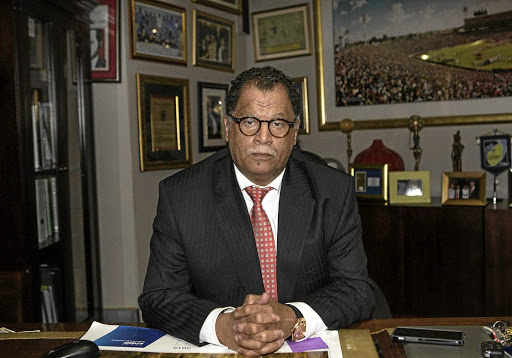 Danny Jordaan says he refused a bribe of several thousand dollars because he did not want to be corrupted.
Image: Simphiwe Nkwali

The African football fraternity has been hit by another bribery, corruption and vote-rigging shame.

Allegations of "brown" envelopes being shoved under doors and leading African football administrators woken up in the un-Godly hours to be offered bribes have resurfaced.

Those walking the hotel corridors in the dark either target officials to swing the votes in favour of a particular candidate, or those standing are solicited to pay a bribe in order to get the votes.

Bizarrely, the allegations were made by the honourable Safa president Danny Jordaan during last week's MSW Sports Show on Radio 2000, claiming he was woken up at 4am by a knock on the door of his hotel room to be offered a bribe. "I've never taken a bribe in my life," declared Jordaan on air.

The local football head honcho said two "brown" envelopes containing amounts of about $15000 (R221150) and $10000 were offered to him but he refused to be corrupted.

At the time Jordaan was a contesting candidate together with Malawi Football Association president Walter Nyamilandu-Manda and former Tanzania Football Federation president Leodgar Tenga, for a spot on the Fifa general council at the CAF congress in Egypt.

But he missed out on the spot after he was beaten by Nyamilandu-Manda because, as he said, he stood his ground and refused to be corrupted by taking the two "brown" envelopes. It's unclear whether or not the offered bribe required him to withdraw his candidacy.

South African Football Association president Danny Jordaan lost out on his bid for a seat on the FIFA Council on Sunday‚ beaten by a rogue candidate ...
Sport
3 years ago

This latest bribery scandal to hit the continental football body's biggest gathering is nothing new, and it seems it's far from being the last.

Just a few weeks ago, the football world was in shock when Fifa announced it had slapped Zambia's revered football official and soccer legend Kalusha Bwalya with a two-year ban for allegedly accepting a $80000 (R1.2m) "gift" (bribe) from discredited Qatari football official Mohamed bin Hammam.

The bombshell comes after Ghana Football Association president Kwesi Nyantakyi was filmed taking a bribe a few months ago.

Nyantakyi had to step down from all his positions related to football, including serving on the CAF executive and the Fifa council, thus opening a position for Jordaan, who was a Cosafa-elected candidate, to contest the vacant position.

Tenga fell out of contention after the first round of voting, leaving Jordaan and Nyamilandu-Manda to do battle for the vacant Anglophone spot.

For Jordaan, the defeat was like being hit under the belt. His ambition of being a member of the Fifa council has been thwarted at elections dogged by bribery allegations.

Besides the bribery incident, it has however emerged SA's decision to back a united bid of Canada, Mexico and the USA for the 2026 World Cup instead of Africa's candidate Morocco has soured relations between northern and southern Africa football associations.

The culture of bribery and corruption has dogged African football for decades but Jordaan wants us to believe he is squeaky clean. A man not to mess with.

I wonder if CAF boss Ahmad has beaten them rather than joining them.