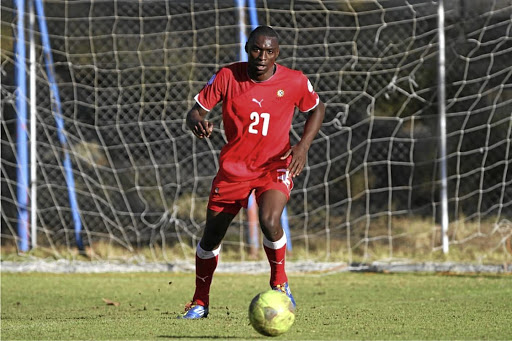 Namibian footballer Phineas Nambandi says the last thing he wanted was to take PSL side AmaZulu to Fifa and would have preferred to negotiate a settlement with the club.

Usuthu finally paid up R1.5m this week, including interest, after they were ordered to compensate Nambandi, whose contract they terminated in 2014.

Fifa stated that AmaZulu should pay "R1.086-million as compensation for breach of contract within 30 days from the date of notification of the decision", and because of 5% interest as from July 25 2014, they paid more.

It's believed that Nambandi would have settled for R300000 four years ago if the club had engaged him.

AmaZulu were initially docked six points for refusing to pay by the deadline of September 16 and risked
further punishment, specifically relegation, if they didn't pay up by October 16.

Speaking to Sunday World, Nambandi, who currently plays for army team Mighty Gunners in his home country, is saddened that AmaZulu have lost their points.

"I was at the club for a year and they treated me well," Nambandi said via telephone.

"But this is out of my hands. It's not good for football that things had to go this far."

He confirmed AmaZulu have made payment to settle their debt, but refused to give more details.

AmaZulu and Orlando Pirates went toe to toe like two boxers on the offensive in an exciting 1-1 Absa Premiership draw at King Zwelithini Stadium on ...
Sport
3 years ago

Nambandi didn't play football for two years after his contract was terminated by the KwaZulu-Natal side owing to an ankle injury.

According to a source in Namibia, no club wanted to sign him until Gunners took a chance on him.

"I'm proud of the work that Fifa did to get me some justice. It sets an example, but like I said, I hoped things didn't have to go this far.

"For myself, I'll have peace of mind," added Nambandi, who had joined AmaZulu on a three-year deal from Tigers FC in 2013.

He played just one game on SA soil before returning home when his contract was terminated.

Polokwane City, meanwhile, are also in Fifa's firing line for failing to pay Senegalese striker Faye Baptiste after they were ordered to do so a year ago.

Fifa says that the Limpopo side has not responded.