Ajax-Ndoro saga does not concern me - Leopards boss David Thidiela 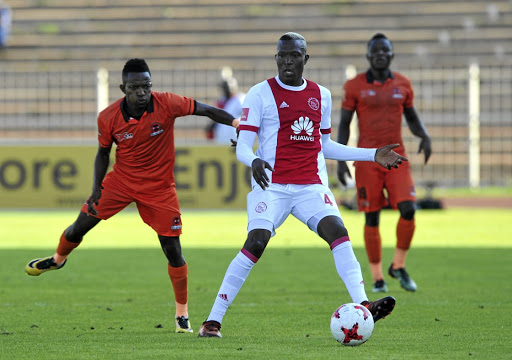 Tendai Ndoro of Ajax Cape Town is challenged by Mondli Miya of Polokwane City during their PSL match at the Old Peter Mokaba Stadium in February.
Image: Sydney Mahlangu/ BackpagePix

It's business as usual at Black Leopards despite the cloud hanging over the recently promoted Limpopo side in the aftermath of the protracted Ajax Cape Town-Tendai Ndoro saga.

No doubt the raging court battle between the PSL and relegated Ajax should be a cause for concern to Leopards, but Lidoda Duvha chairman David Thidiela has downplayed the effects of the case on his club's preparations for the new 2018/19 football season.

Never someone to mince his words, Thidiela said: "Have you seen me commenting in the papers about this [matter]? I have not. No, it has not affected the team's plans.

"In fact, I don't want to talk about it, it's far from me. I have nothing to say, it does not affect me or the team's preparations."

The never-ending Ndoro eligibility rigmarole that saw the Zimbabwean striker playing for three clubs, including Ajax, this past season, has been a hot potato for the PSL.

The league and the affected clubs' readiness has been hampered following the PSL board of governors' decision this week to appeal Judge Denise Fisher's ruling.

Leopards won promotion through the PSL promotion/relegation play-offs that have now been thrown into doubt after Fisher ruled in favour of Ajax Cape Town earlier this month.

The previous ruling by Safa arbitrator Advocate William Mokhari, stating that Ajax should be docked points and relegated, was overruled.

Since then, Ajax were dramatically relegated after being found guilty of transgressing the players' status rules.

It's being argued that Ndoro should not have represented Ajax last season as it was against Fifa rules for a player to play for three teams in a season. But the PSL's Dispute Resolution Chamber had cleared Ajax to field Ndoro.

Ndoro had played for Pirates and Al Faisaly of Saudi Arabia before joining Ajax in January.

The PSL appealed that decision and won. The Urban Warriors fought the matter, leading to them getting a reprieve when Fisher set aside Mokhari's ruling, arguing that Mokhari didn't have jurisdiction over the matter.

Fisher referred the matter to the Fifa Players' Status Committee. The PSL board of governors on Thursday decided to appeal the latest ruling.

The Premier Soccer League have resolved on a two-pronged approach on their appeal of the High Court decision to reinstate Ajax Cape Town from ...
Sport
3 years ago
Next Article