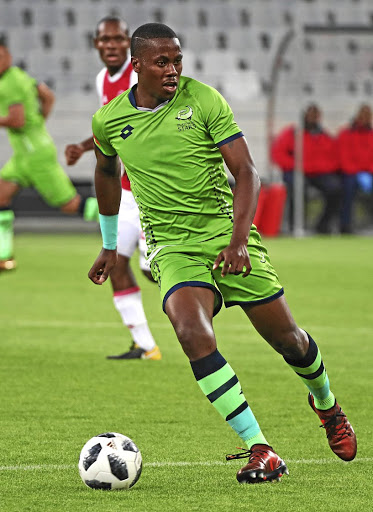 Bonginkosi Ntuli is not going down with relegated Platinum Stars to NFD. / Chris Ricco/ BackpagePix

Since joining Mamelodi Sundowns from Lamontville Golden Arrows in 2014, striker Bonginkosi Ntuli has hardly played for the Tshwane-based outfit.

Instead, Ntuli, 27, has spent the last three seasons on loan at both AmaZulu and relegated Platinum Stars.

In the 2014/15 season, his first season at Sundowns, Ntuli registered only two appearances and that was it for him.

Since then, he has never donned the famous Kabu Yellow Sundowns jersey.

And his six goals and three assists in the league last season couldn't help Platinum Stars stave off relegation.

Nevertheless, after seeing out his loan stint at the now relegated Stars - who will now be called Cape Umoya when they contest in the second-tier of South African football next term - Ntuli is ready to go back to Chloorkop and justify to coach Pitso Mosimane that he deserves a place in the team.

The bulky centre-forward is contracted to Bafana baStyle until June next year.

"I'll not be going down with Stars [to the National First Division]. I'm still a Sundowns player and I want to fight for my place in the team.

"I'm willing to convince the coach that I can help the team," Ntuli told Sunday World.

"I'll report to Sundowns training early next month and we'll take it from there, but I want to show the coach that I'm ready to play for the team."

The Pietermaritzburg, KwaZulu-Natal lad has also been linked to the club that gave him his maiden professional deal, Golden Arrows, but he says he hasn't been contacted by Abafana Bes'thende, reiterating that he knows nothing about their interest in his services.

"Arrows have not talked to me. I know nothing about the club wanting me back.

"What I know is that I'm a Sundowns player and I just want to get game time, that's what is important to me at this stage," said the ex-AmaZulu marksman.

Time will tell if Jali goes up with Downs

New signing turns back on Pirates to choose winners.
Lifestyle
3 years ago
Next Article