'Tommy Gun' poised for a comeback 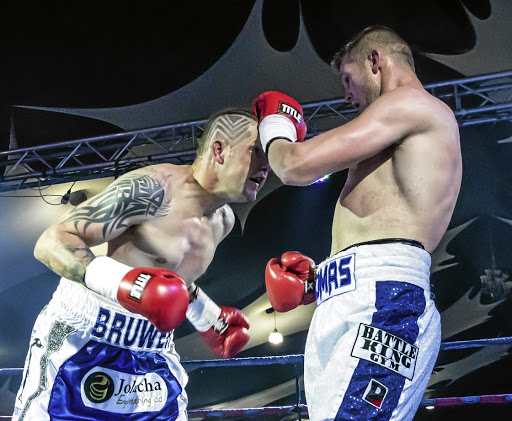 Daniel 'Billy the Kid' Bruwer, left, and Thomas 'Tommy Gun' Oosthuizen. Oosthuizen is ready to get back into the ring.
Image: Nick Lourens

It was like sweet music to diehard boxing fans' ears to hear that troubled child Thomas "Tommy Gun" Oosthuizen had opened up to Golden Gloves fight publicist Brian Mitchell about his life of booze and drugs, which landed him in jail before his release this week.

Oosthuizen is a former IBO super middleweight, ABU and IBO light heavyweight boxing champion, whose wayward life delayed his greatness as a fighter.

The left-handed boxer, who spent some time in a jail cell after being found in possession of drugs, told Mitchell that he had put himself in this bad situation by hanging out with the wrong friends and by being at the wrong places.

I must say this is the first step towards rehabilitation because it all starts from within. Admitting to his wrongs is a sign of maturity and a cry for guidance that will enable Oosthuizen to fight the demons that have killed his moral fibre and virtually brought to an end a bright boxing career.

Promoter Rodney Berman and trainer Harold Volbrecht have aged overnight due to what they have been put through by Oosthuizen. But they have stood by him over the years, promising to help him pick up the pieces and march with him to stardom.

Berman intends to feature Oosthuizen in his tournament on September 1.

Accomplished ring veteran Mzonke Fana has dismissed rumours that he has applied to Boxing SA (BSA) to be relicensed as a boxer.
Sport
3 years ago

There have been several great comebacks in the history of boxing, involving the world's greatest boxers.

Old-time greats like Sugar Ray Leonard and Mike Tyson were at one time on the destructive fast lane, but eventually realised that one cannot drink poison and expect the enemy to die.

Leonard admitted that he took cocaine and drank heavily during the early 1980s when his career was jeopardised by an eye injury.

He said he had indulged in cocaine for three years, quitting in 1986. The former world welterweight and middleweight champion said he began using cocaine after suffering an eye detached retina in training in 1982. He retired after doctors advised him that he would lose his sight if he fought again.

He said he took cocaine to "forget about my problem".

He quit after he realised one day that "what I saw in the mirror was scary". Leonard came back from retirement to beat Kevin Howard in 1984, shortly thereafter retiring again. In April 1987, he staged another comeback, winning the middleweight title from Marvelous Marvin Hagler. He retired for good in 1991.

Tyson, on the other hand, admitted in 2013 that he was high on drugs during some of his major fights. He disclosed in a new tell-all memoir that he was addicted to cocaine and marijuana during his turbulent career.

Tyson said he had taken cocaine before the notorious televised press conference with Lennox Lewis in 2002 which descended into a brawl. "I was a full-blown cokehead," Tyson wrote in Undisputed Truth.

I urge you not to judge Oosthuizen. Like many before him, he deserves a second chance. His handlers have to walk with him on his road to recovery.

As they say, "It takes a village to raise a child." Doesn't it? I take my leave.

Thabiso "The Rock" Mchunu and Thulani "Evolution" Mbenge will emerge victorious in their bouts next Saturday, says Sean Smith.
Sport
3 years ago
Next Article