Maela on the ball for Bucs 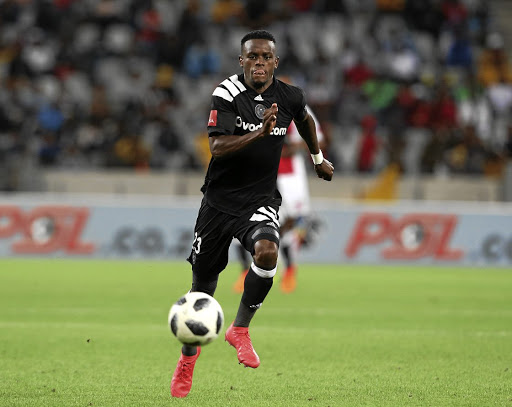 Innocent Maela has been identified by Bafana Bafana coach Stuart Baxter as a player with potential to challenge for a place in the senior Bafana Bafana squad at this week's Cosafa Cup.

Maela was one of four players who left camp in Polokwane, where Baxter's youthful, emerging SA squad play their first match in the Cosafa quarterfinal against Madagascar at Peter Mokaba Stadium this afternoon at 3pm, to travel to the PSL Awards on Tuesday.

He lost out to Bafana's Cosafa captain and Maritzburg United centreback Siyanda Xulu for defender of the season.

But, Maela had a breakthrough season for Pirates. Bucs' young fullbacks, Maela on the left and Mthokozisi Dube on the right, provided an energy crucial to coach Milutin Sredojevic's dynamic football played by the PSL's runners-up.

"The game model we are trying to implement is more or less how the European teams play. Their fullbacks are always pushing high, even finding themselves in scoring positions," Maela told Sunday World. "Obviously we work hard on it. You have to have the right fitness and the mentality to go up and down the line."

Maela was part of Baxter's Cosafa Cup squad last year, having just been recalled from loan at Thanda Royal Zulu to Pirates.

"Playing in the Cosafa Cup helped me with breaking into the first team at Pirates," he said. "The coach [Baxter] tries to teach you how to play the game . So, when I went back to Pirates, I had been exposed to that kind of coaching."

Maela got his first game in a 1-0 win against Chippa United at Orlando Stadium in August, and never looked back with 23 more league appearances. "That opportunity you get in your first game can make or break you. I got man of the match. But, honestly, I never thought in my wildest dreams I would be a regular for Pirates so soon."

Maela sums up Bucs' game model as: "Possession. Make sure you don't lose the ball. If you do, you must get it back."

- Strydom is in Polokwane as a guest of Cosafa