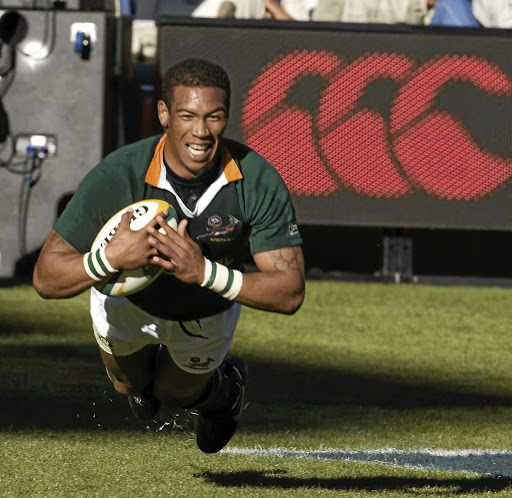 Former Springbok winger Ashwin Willemse's SuperSport studio's on-air rant and subsequent walkout, saying he would not be "patronised by two individuals who played in the " apartheid era" has reopened the never-healing wounds of racism in South African rugby.

Incidents to try and stifle transformation in rugby are well-documented, well before the time of the lily-white rugby under the notorious apartheid rugby boss Louis Luyt, to today's deliberate sidelining of black players during team selections by coaches.

Players have suffered in silence for fear of victimisation, only to speak out when their playing days are over, after enduring painful experiences of being treated as though they don't belong to the "green and gold" hierarchy.

Disgustingly, SuperSport henchman CEO Gideon Khobane, adamantly declared, even before the investigation into the Willemse incident had been completed that it was "not a racially motivated" incident.

The same Khobane, the head of the sports channels, who always has his boss, MultiChoice CEO Calvo Mawela, by his side whenever addressing the media. Can't he be trusted and left alone to do his job of putting the "record straight" and speaking his mind independently, without Mawela's interference?

A TV spat that shocked SA

If Ashwin Willemse was branded a "quota player" by fellow SuperSport presenters "it is sad, especially in this day and age".
Sport
2 years ago

And if the matter of the walkout is receiving urgent attention, why did Khobane have to jump the gun and preclude racism as not having led to what Willemse did?

Up to this day, we don't know what apartheid-era Boks and co-presenters Nick Mallet and Naas Botha actually said, utterances that apparently rubbed the former player of the year award winner up the wrong way.

But of grave concern is how SuperSport has tried to sweep the bothering racism undertones directed at Willemse by Mallet and Botha, under the carpet.

We know for a fact that rugby in this country has had a far wider problem of racism that cannot be sugar-coated, even by TV sports channel CEOs.

We have to stop burying our heads in the sand, pretending some wishy-washy internal investigation will solve this country's sporting race relations problems.

Spin-doctoring by the pay-per-view channel's bosses since Monday was so opaque for everyone to see, it is not funny.

The saga of SuperSport rugby pundit Ashwin Willemse’s walkout of a live broadcast last weekend took a new twist when he and co-presenters Nick ...
News
2 years ago

Sugar-coating the incident is not doing their PR any good as the matter is not going anywhere, fast. Instead, it is here to stay until the sports channel's management deals with the root-causes decisively.

"I've played this game for a long time, like all of us here, you know.

"And as a player I was labelled a quota player for a long time. and I've worked hard to earn my own respect in this game," a peeved Willemse declare during the walkout.

Coming from an impoverished background and working his way up the ladder to qualify to play and win the 2007 rugby World Cup is an achievement second to none on the part of Willemse.

Now to be told he was a quota player is an insult second to none. A player not deserving of donning a Bok jersey? Balderdash.

We also know white supremacists still hold on to the only sporting and recreational activity they believe is their last bastion. Rugby. The matter remains unresolved, the trio will not go on air this weekend ... despite not being suspended. Investigations and talks are continuing ... my foot.

In what was an unexpected and shocking twist of drama at the SuperSport studios in Randburg, former Springbok wing Ashwin Willemse walked out of the ...
Sport
2 years ago
Next Article