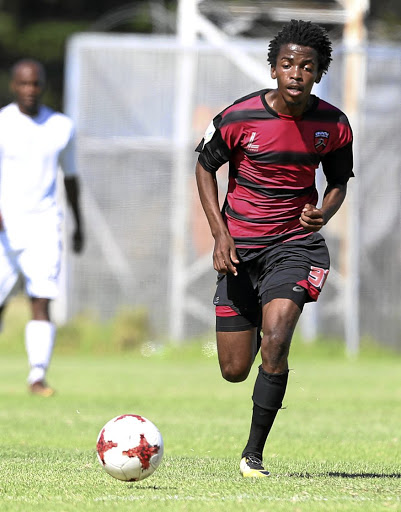 Until you see him mesmerising defenders, SuperSport United youngster Kamohelo Mahlatsi, currently on loan at Ubuntu Cape Town in the NFD, won't strike you as the real deal, all because of his pint-sized build.

Mahlatsi, 21, joined Ubuntu in January, on loan from SuperSport until the end of this season. He has since featured in eight matches, scoring twice and registering two assists in all competitions.

His style of play mimics that of Barcelona and Argentina superstar Lionel Messi. His close control with the ball, speed, dribbling, crossing, and ability to use both feet allow him to play in any offensive position on the field.

Though Ubuntu are struggling to get out of the relegation zone in the NFD, Mahlatsi has been one of their standout performers, having also played a pivotal role in propelling the Capetonians to the quarterfinals of the Nedbank Cup when they scalped AmaZulu early last month.

Church is everything to AmaZulu striker Rhulani Manzini

Without God, I wouldn't be where I am - Manzini.
Sport
3 years ago

The lad from the Vaal bagged the man of the match accolade in that encounter after netting one goal and registering an assist in their historic 3-2 victory in Durban.

The diminutive yet versatile player feels his exploits in Ubuntu colours will pave the way for him to return to Matsatsantsa a Pitori and break into the first team next term.

"I have been working very hard here at Ubuntu. My aim is to return to SuperSport and challenge for a berth in the starting line-up next campaign," Mahlatsi said .

"I have learnt many things in the NFD and I feel like I have improved. My technical awareness is now better and now I can also track back though my primary task is to attack," added the goal poacher.

Midfielder remains down to earth
Sport
3 years ago
Next Article