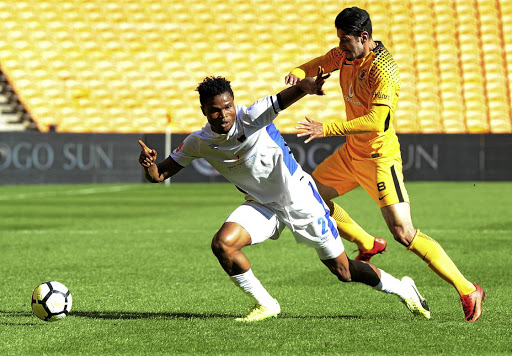 James Okwuosa of Chippa and Leonardo Castro of Chiefs tussle for the ball during the PSL match at FNB Stadium last night.
Image: Veli Nhlapo

The insults from the Kaizer Chiefs supporters were enough to sum up their 3-0 home loss to Chippa United here yesterday.

From being calm and hopeful in the first half despite being 1-0 down through a Thabo Rakhale goal, they just couldn't take it by the final whistle after Mxolisi Macuphu and former Chiefs boy Edward Manqele added two more goals in the second half.

The win completed a double for the Chilli Boys over Steve Komphela's charges, who they also beat 1-0 at Nelson Mandela Bay Stadium in December.

The score is, however, flattering, because for one, Chiefs had seen the most possession for the better part of the match.

They had come into the match confident of collecting all three points to keep up with the pacesetters Mamelodi Sundowns and rivals Orlando Pirates in the final run-in, but were confronted by a Chippa side that had other ideas.

As early as the 14th minute Amakhosi were forced into a change after Ramahlwe Mphahlele picked up a hamstring injury and was replaced by Bhongolethu Jayiya .

Things went from bad to worse for Chiefs when Rakhale burst into the area and rolled the ball under the on-rushing Itumeleng Khune for the visitors' opener.

Teenage Hadebe rose to head in Siphiwe Tshabalala’s free-kick four minutes and 30 seconds into injury tie for Kaizer Chiefs to snatch a last-gasp 1-0 ...
Sport
3 years ago

In their bid to fight back, Chiefs introduced forward Bernard Parker for defender Teenage Hadebe at the break.

Jayiya was booed by the home fans and Komphela subbed him with Dumisani Zuma minutes later.

Amakhosi had a few chances after Zuma's introduction, but Chippa's second goal from Macuphu sucked out all the fight left in them.

Chippa weren't done yet. Manqele, who, ironically, flopped at Chiefs, had to apply that final nail into the coffin.

Predictably, the chants fromm the fans were familiar in the end; "Steve must go, Steve must go".

A day to forget for Chiefs and one to savour for Chippa.

Chiefs' reliance on set-plays 'no issue'

Siphiwe Tshabalala does not see Kaizer Chiefs' overdependence on set-piece goals as a weakness.
Sport
3 years ago
Next Article