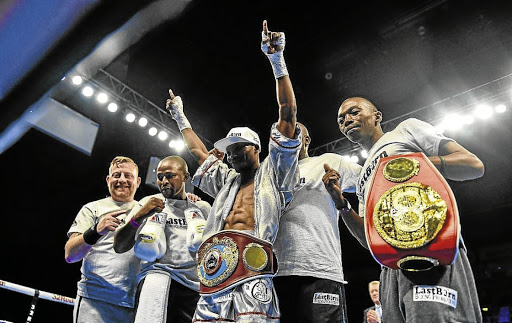 For his next bout, Zolani Tete has set up camp in Mdantsane.
Image: SUPPLIED

South African superstar boxer Zolani "Last Born" Tete is looking forward to another show-stopping knockout when he puts his WBO bantamweight title on the line.

Tete will make his highly anticipated return to Northern Ireland when he takes on Argentinian Omar Andres Narvaez in Belfast on April 21.

It is where the clinical left-hander established himself as one of the explosive punchers in the division and impressively introduced himself with a stunning 11-second knockout of countryman Siboniso "Tiger" Gonya from Mtubatuba in KwaZulu-Natal in November.

That was the quickest knockout in a world title defence on record.

Will the Boxing Day Test work in Jozi?

Highveld Lions chief executive officer Greg Fredericks had every reason to smile and have a swagger in his walk.
Sport
4 years ago

It will be Tete's second defence against vastly experienced Narvaez, who has 25 knockouts in 48 wins, two losses and two draws. The fight was supposed to have happened at Copper Box Arena in London on February 10 but the 30-year-old boxer from Mdantsane injured his calf.

His English promoter Frank Warren postponed the bout to April 24.

This time, Tete is preparing for his bout at home in Mdantsane. He has always set up camp in Johannesburg.

"Most of my sparring partners are here in East London, so we felt we should stay here at home this time," said Tete who is trained by Loyiso Mtya, Phumzile Mathyila and the boxer's father Zolile Tete.

Tete's successes last year earned him BSA's 2017 boxer of the year award, and his WBO title win outside SA earned him the special achievement award in January during the ceremony in Port Elizabeth.