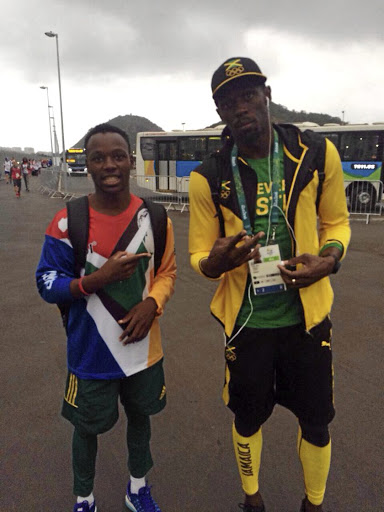 Clarence Munyai with Usain Bolt at the Athletes Village in Brazil during the 2016 Rio Olympic Games.
Image: SUPPLIED

Clarence Munyai, 20, will go down in history as the man who broke Wayde van Niekerk’s SA 200m record. Daniel Mothowagae gets to know the other side of the rising sprinter.

What size are your running spikes?

What kind of music psyches you up before races?

Anything by Jay-Z and Kanye West.

What's the most expensive gadget you ever bought while travelling ?

I would say my beats headphones, they cost R6000.

What car do you drive?

Not many are aware you are a twin, what's your other half up to?

My twin brother is more interested in music and media.

In your travels, which city would you say is best?

Paris - they have nice food and the city itself is so beautiful and alive. 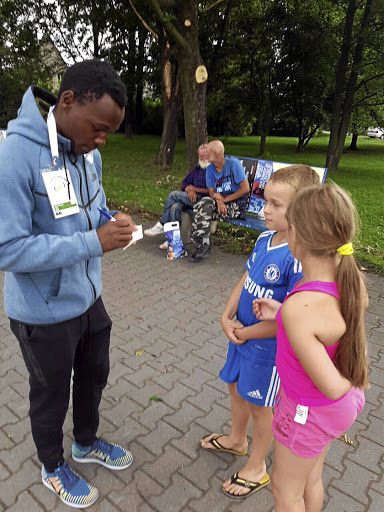 Clarence Munyai signing autographs after his magical run in the 300m in Ostrava, Czech Republic, in June 2017.
Image: SUPPLIED

Take us through your training regime.

I train six times a week. Monday, Wednesday and Friday is for speed sessions, which include block starts and faster runs. Tuesday, Thursday and Saturday are tempo days where I focus on technique and much slower running, of which 60% is recovery runs.

What time do you normally go to bed before races?

I sleep at around 10pm or earlier but on the eve of my record-breaking run [at the SA Championships in Pretoria last Friday] I slept pretty late, at around 1.30am because I was quite nervous.

Is there any special message from your coach that always plays in your head before big races?

Coach Hennie Kriel always says "they fear you every time you step onto the field; give them more reason to fear you". I keep these words in my mind all the time.

What does your 19.69 seconds SA record run mean, given that you have the Commonwealth Games coming up next month?

It puts so much pressure on me because now people from all over the world want to see this Clarence Munyai guy run fast every time. The Commonwealth Games [next month in Australia] will test if I am ready to start winning at the highest level.