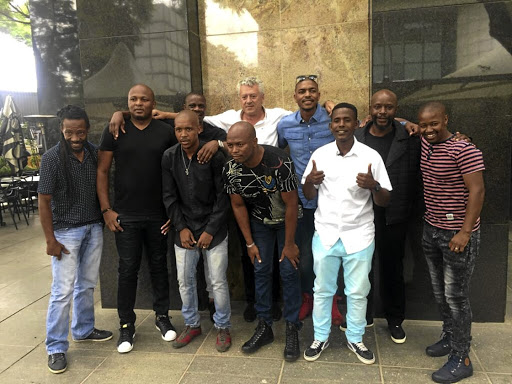 It's not every day that you see a coach meet his former players for lunch.

This played out in Rosebank, Johannesburg, this week when former Orlando Pirates coach Kosta Papic and his ex-players hooked up after more than 10 years.

Between 2004 and 2006, the Serbian was in charge of the Buccaneers and his team, even though they didn't win a trophy, was loved by the Bucs faithful for their attractive football. Pirates were even called the "Happy People" at the time.

Orlando Pirates will not settle for anything less than a win when they lock horns with Chippa United.
Sport
4 years ago

Liau, who attended the lunch reunion, told Sunday World that the players were very close to Papic, hence it took just a day to plan the lunch.

"Look at James [Mothibi], he came all the way from Warrenton in the Northern Cape just for the gathering," Liau said.

"It's unheard of that a former coach can call his former players and they come in such big numbers. That gathering was planned in just one day, so it wasn't a case of weeks or anything like that.

"You can't see some of the guys in the pictures, because those were taken earlier in the day before everyone arrived," he explained.

So what made Papic special despite him not winning a trophy in his two seasons with the club?

"Kosta was our outie (pal) and we were enjoying life with him on and off the field. It was not just about work. So after games we would chill and drink with him, but we knew that on Monday it was back to work."

Heading into the final third of the Absa Premiership season‚ current form will be crucial in deciding who will be crowned championships come May.
Sport
4 years ago

Papic paid the bill for the lunch.

"We also had an amazing team spirit and we were more like family. It was the first time we met like that and had a sit down in years, but we've been chatting on the phone."

Pirates, who at the time were called the "Happy People", never won trophies, hence that group is known as the "uncrowned kings".

"People tend to forget that football is about entertainment and, as much as it is business, people go to the stadium to enjoy good football. I think we played great football, but we were just unlucky," Liau added.

Papic is without a job at the moment after parting ways with National First Division side Royal Eagles recently. He is returning to his home country today.

Augustine Mulenga might be out injured, but his Zambian compatriot Clifford Mulenga has high hopes.
Sport
4 years ago
Next Article