Ncapayi not outmatched in awards 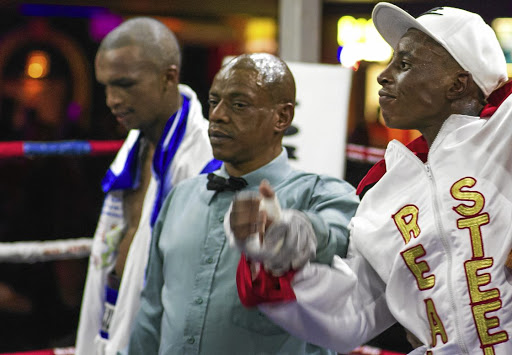 Ben Ncapayi raises the arm of winner Sibusiso Zingange after a bout. Ncapayi is a firm ref whose mobility is getting better. / James Gradidge

Pocket-sized boxing referee and judge Ben Ncapayi was modest in his response after his inclusion in the final list of nominations for Boxing South Africa's 2017 male official of the year award.

Ncapayi, 45, is a former professional boxer from Mdantsane, near East London in Eastern Cape, but is now based in Gauteng.

Although the general view is that the public - who nominated him - actually threw him in the lion's den by putting him up against seasoned officials Deon Dwarte from Cape Town and East Londoners Lulama Mtya and Allen Matakane.

The trio have served the sport with distinction for more than two decades.

As a referee, Ncapayi has made great strides in mastering the art of not taking the limelight away from boxers during a fight.

Zolani Tete‚ Azinga Fuzile‚ Thulani Mbenge and Kevin Lerena have been nominated for the Boxer of the Year category in the Boxing South Africa Awards ...
Sport
3 years ago

Ncapayi is also a firm referee, with his mobility getting better with time. He has officiated in more than 50 fights in Gauteng, Free State, Mpumalanga, North West and KwaZulu-Natal.

"It is exciting to be nominated," he said. "I am nervous at the same time, just like a boxer going into the ring. But I see my nomination alongside those guys as a victory already.

"The recognition makes me feel proud of my love, commitment and dedication to boxing. I give credit to my provincial manager [Archie Nyingwa] and my colleagues for always being honest with me. Their advice has made me grow as an official."

Ncapayi is also involved in the development of boxing in the SA National Defence Force (SANDF). He is credited with spotting the talent in Smangele "Smash" Radebe.

He personally took Radebe from her home in KwaThema, Springs, to Eastern Cape, where she won a gold medal in the SANDF Championships in 2013. Radebe is contesting BSA's 2017 female prospect of the year award.

There was a gnashing of teeth from boxing licensees in East London on Wednesday when Mzamo "Chief" Njekanye was not mentioned in the final list of ...
Sport
3 years ago

Mokaila, from North West, is one of the finest officials in the country, but she was not active during the review period.

The rule book stipulates that nominees in all 16 categories must have excelled in their various assignments during the period from October 1 2016 to October 31 2017.

Zinakile had a splendid year, showing maturity and decisiveness both as a referee and judge in almost 40 fights that included SA, world and international championship bouts.

She showed control and required interpretation of the rules. Tyuluba, from Mdantsane, also showed improvements.

Veteran matchmakers Reuben Rasodi (last year's winner) and Luyanda Kana, as well as newcomer Abbey Mnisi, are up for the matchmaker's award. Matchmakers work for promoters. In rare instances, they put together bouts to complete a card without regard to who wins or loses.

BSA's crowning ceremony will take place at the Boardwalk Casino in Port Elizabeth on February 2.

Boxer of the year a tough call for adjudicators

The strong competition for Boxing SA's boxer of the year award will give the adjudication committee sleepless nights trying to choose the winner.
Sport
3 years ago
Next Article