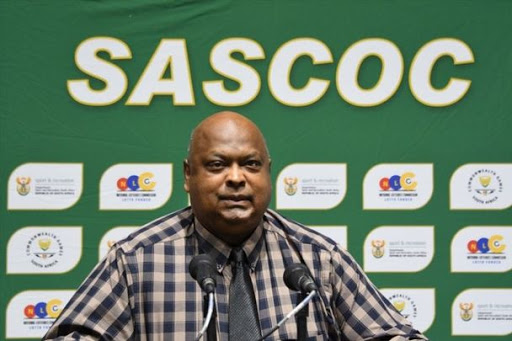 The SA Sports Confederation and Olympic Committee (Sascoc) has spent R2.9-million to date investigating three senior managers — and the matters are still not concluded.

This emerged in Parliament on Tuesday when top Sascoc brass‚ including president Gideon Sam‚ appeared before the Sport and Recreation portfolio committee.

CEO Tubby Reddy was suspended on full pay in mid-July amid a probe into allegations‚ including sexual harrassment‚ and it was disclosed his hearing will be heard in early December.

Meanwhile‚ Nxesi announced in late August he would institute a commission of inquiry into maladministration at Sascoc.

“Two inquiries‚ by the minister and Sascoc‚ is wasting taxpayers’ money which could be used to the betterment of sport in SA‚” said Mhlongo.

Sam said such investigations “can never be cheap”‚ especially this one where IT specialists had to trawl through data on laptops on top of the costs of legal personnel.

Mhlongo was also shocked that there were no service providers of sport regalia for Team South Africa for the 2018 Commonwealth Games in Australia.

Sam said they would be looking for team apparel in Italy.

He added he expected the team in Gold Coast to total around 300‚ including officials.

Mhlongo said Sascoc officials had told them there was no relationship between themselves and Sedgars‚ the company that was allegedly linked to paying for a trip to Dubai for the former sport minister‚ Fikile Mbalula.

Mhlongo was also unhappy about the “scant” financial information provided at the briefing by Sascoc.

Sam described the meeting as “tough”‚ and added at times they had to concede that they had made mistakes‚ like when they exceeded the Sascoc constitution by appointing 15 board members instead of 14.

“They said we should have interpreted the constitution better.”