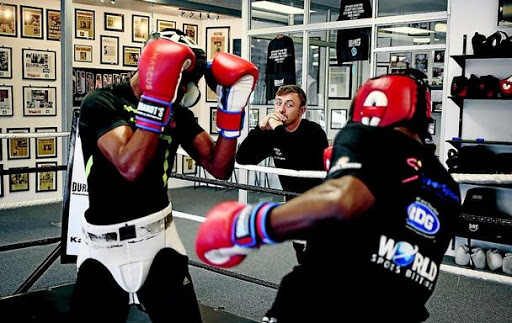 Respected boxing trainer Nick Durandt's son Damien has picked up the spear after his father passed on in April.

Some people described Nick as arrogant, aloof and ill-tempered while others found him to be very nice, soft-hearted, yet a no-nonsense person who lived, loved and respected the boxing craft.

After a movie of that name, Damien became associated with the devil in the minds of many - the lead character is basically the son of the devil.

Yet there seems to be very little of the devil in the 26-year-old.

"My man, you know too well. I am a straightforward person. I would not be working with him if he was not welcoming. He is a gentleman and boxing really needs people like Damien," said Thysse.

Said Fourie: "He has a beautiful persona and is a wonderful gentleman. He works very well with people, and his boxers respect him. Just look at the vibe in his gym - superb."

Castle said: "I've got lots of time for Damien purely because of the person he is; a lovely guy. He is honestly like his father. He is welcoming and I think the future is bright for him."

The state-of-the-art Durandt's Boxing Gym, which has three rings, was busy as boxers from different gyms had sparring sessions there during this interview.

Most of his boxers are older than him. Tshabalala is the youngest, at 23.

Damien has already produced two champions in a short space of time. He guided Chauke to the Gauteng bantamweight championship, and saw Ramabolu winning the WBF International middleweight belt.

Damien was first licensed as Nick's assistant at the age of 14. He is his own man who expresses himself politely to his fighters.

Nick was loud and had a way of getting under the skin of his charges. His favourite word was "motherf****r" whereas Damien calls them "brother".

"I am sometimes vocal when it is needed," he said. "I have my own methods of madness, not like my father but I would like to be closer to him as possible."

He said he feels Nick's presence whenever he walks into the gym. He has a special place - a corner in the gym - where there is a big picture of Nick.

"It pretty much describes his career," he said. "It makes me feel positive and ready for anything. I talk to him and ask questions."

Durandt, who has managed the family business and started training clients just after matriculating, said he had challenges just after Nick's death.

"It was tough to get fights from promoters last year. But Andre Thysse was always there for us. This year Ayanda Matiti, Lebo Mahoko, Manny Fernandes, James Maphepha, Steve Kalakoda and Pius Dipheko are looking after us."