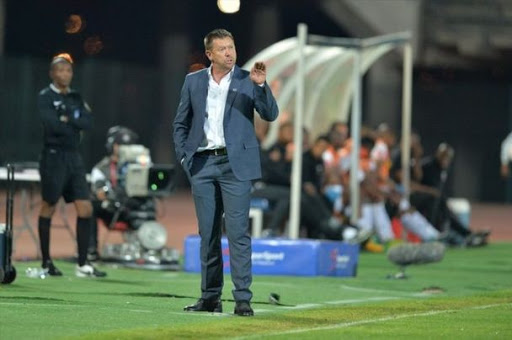 SuperSport United appear to be highly motivated to end their long wait for an MTN8 trophy when they face Cape Town City at Moses Mabhida Stadium on Saturday (7pm).

Matsatsantsa last won the tournament back in 2004 when it was still called the SAA Supa8.

They beat Kaizer Chiefs 1-0 on that occasion in Durban's Absa Stadium, just across the road from Moses Mabhida.

Interestingly, SuperSport coach Eric Tinkler has also been unlucky in the competition, so there is no lack of motivation on his part.

"I got to two finals as a player when it was still known as the BP Top Eight [with Wits, and] unfortunately lost it," Tinkler recalled.

"I also lost a final at [Orlando] Pirates [as an assistant coach]. So this is a trophy I would like to win. The prize money [R8-million] is very, very good in this competition," he said.

The fact that the former Bafana Bafana midfielder coached Cape Town City last season won't count for anything in the decider.

"There's no sentiment when you're a professional. It's about winning," added Tinkler, who declared a fit squad, except for Onismor Bhasera and Thato Mokeke, who are both injured.

Matsatsantsa should be reminded that they lost 2-1 to Cape Town City when the two sides met in the Telkom Knockout final last year.

United captain Dean Furman admitted that the loss "hurt" the team and as much he doesn't want to use the word revenge, that's what they are out for.

"I wouldn't say revenge is the right word, but last year's Telkom [Knockout final] is fresh in the memory. We haven't forgotten about that and that's the one that hurt us. We will be looking to put that one right," Furman said.