Sparks to fly in grudge match 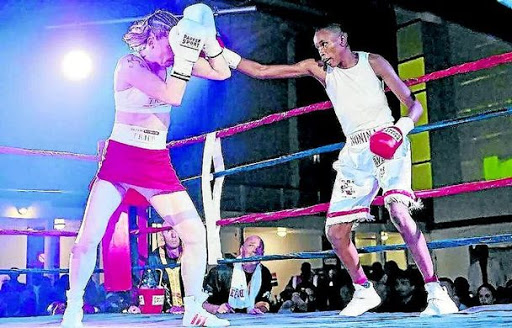 Fight fans at Ferdi Meyer Hall in Welkom, Free State, must brace themselves for a spectacular of a rematch when female adversaries Bukiwe "Anaconda" Nonina and Matshidiso "Nomeva" Mokebisi collide on October 26.

Mokebisi, originally from Idutwya in Eastern Cape, will bid for the first defence of her WBF bantamweight title.

Nonina beat Mokebisi in Durban in March last year to register the fourth defence of her SA title. She went on to make a fifth title defence, which entitled her to keep the Boxing SA championship belt for good.

But then Nonina vacated the SA title after winning the WBF belt against Alesia Graf from German in Khayelitsha seven months ago. Her record to date is 11 wins in 15 fights.

She has eight wins, seven losses and a draw. Their trainers Emmanuel Muthavhatshimbi and Rampolokeng Mkhutshwa promised fans nothing but war of attrition.

"The result will be the same and in fact we are going for a knockout this time bearing in mind that we will face Matshidiso in her backyard," said Muthavhatshimbi.

Mkhutshwa countered: "Matshidiso was not with me when she lost to Bukiwe. She is so determined to avenge the loss and win the title in that she stays at the High Performance Centre in Bloemfontein to avoid disturbance."

Also to feature in the tournament is Sihle "The Sting" Jelwana who will oppose Gift Pilane for the provincial bantamweight title over 10 rounds. The tournament is bankrolled by Free State government.