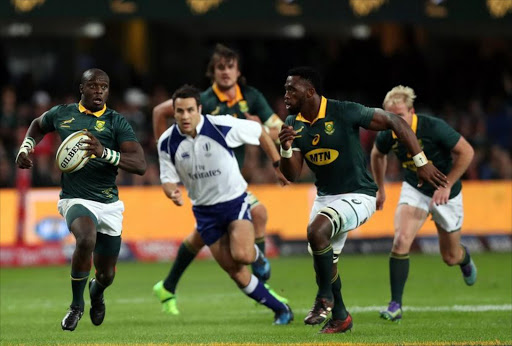 Online classifieds site Gumtree says the avalanche of Springboks vs All Blacks seats being advertised at inflated prices might force it to close its tickets category.

“It certainly merits a discussion‚” said spokesman Estelle Nagel‚ adding that site staff were fighting a losing battle against people advertising tickets to the October 7 fixture at Newlands.

On Wednesday morning‚ tickets were being advertised for up to four times their face value. Five grandstand tickets bought for R950 each were on sale for R20‚000.

Nagel said an earlier ad‚ which offered 10 tickets with a face value of R5‚900 for R25‚000‚ had been taken down but more ads were continually being posted.

“In general you’re not allowed to resell tickets for profit‚” said Nagel. “There is also no guarantee that you will be able to use a ticket bought from unofficial sources.”

Nagel said the fresh crop of ads for at least 34 tickets would “need to be flagged with our guys and we will take them down as soon as possible”.

All 22‚000 public tickets for the 48‚000-capacity Newlands sold out with an hour of going on sale on Monday‚ and Western Province Rugby warned that “only tickets bought from wprugby.computicket.com‚ Computicket outlets or the stadium box office are guaranteed valid for the Rugby Championship Test match”.

The WP statement added: “These are the only outlets which are licensed to sell tickets to Newlands. Newlands 2017 season tickets are valid for the Test‚ with no further action required.”