Baxter hits out at journalists after Bafana's defeat to Cape Verde 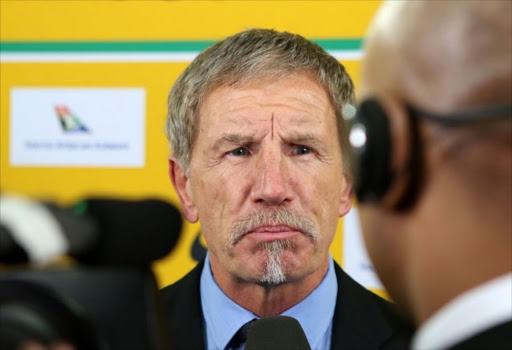 Bafana Bafana coach Stuart Baxter usually exudes a calm and collected demeanour but he showed his other side after Bafana's 2-1 defeat to Cape Verde Islands at Moses Mabhida Stadium on Tuesday night.

Appearing before journalists moments after the deflating defeat‚ Baxter was seemingly frustrated by their line of questioning and instead of giving the answers‚ he too was asking questions.

Asked what went wrong in the two matches against Cape Verde (Bafana also lost the first game by the same score)‚ the 64-year-old Briton lashed out at his inquisitors.

“The pitch didn't suit us (in the first leg last week)‚ but we got our noses in front and two poor pieces of defending gave them goals (in Praia).

Baxter argued that his charges gave away a soft free kick that was driven home by Garry Rodrigues for the opener‚ before the forward was given space to shoot to complete his brace.

The former SuperSport United coach was also asked to explain some of his changes‚ especially the introduction of midfielder Andile Jali for striker Bradley Grobler in the 65th minute at a time when Bafana were chasing the game.

The change meant Bafana were playing with three central midfielders at that stage - Jali‚ Dean Furman and Hlompho Kekana‚ who later came off.

“Do you think Jali is a more creative player than Kekana?

"I'm trying to be calm and balanced to answer your questions.

"But everybody thinks that every player that you change you could ask me ten questions.

"Why did you take out Bradley Grobler when he's the one that can head in the crosses?

"Why did you put Lebo (Manyama) behind the two strikers?

"I can sit here all night.

“Jali is an attacking option.

"We are 2-0 down and I want all my attacking options on the field.

"Many people would say well it was the wrong time (to introduce Jali) and he was the wrong player‚ (but) that's their opinion and that's what football is about‚” he said.

It didn't end there.

Baxter went as far as saying to one of his inquisitors: "You are watching too much television".

The journalist had suggested that the upfront combination of Tokelo Rantie and Grobler didn't work.

But Baxter claimed he was in fact playing with three strikers‚ including Keagan Dolly.

But things did not work out as he intended because of a lack of combination play from the team‚ especially in attack and not just the strikers.

“Bradley had a couple of chances.

"Tokelo had a couple of chances‚ so I can't say (it didn't work).

"If they had smashed one of those into the back of the net‚ we would be saying it worked fantastically well‚” he said.

The defeat could well put paid to Bafana's hopes of qualifying for next year's World Cup in Russia.

Bafana will play the two countries in their last two matches.

Baxter will do well to keep his calm in the last two matches against Burkina Faso‚ at home next month‚ and Senegal away in November.

It won't get any easier.