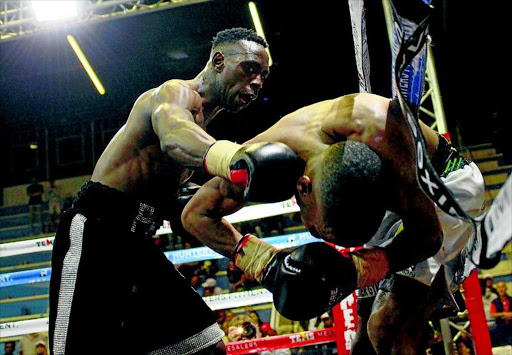 Mzimasi Mnguni guided Phila Mpontshana to the retention of his SA junior lightweight title against Lucky Monyebane in Joburg at the weekend, despite lying in an East London hospital bed.

"He [Mzimasi] called us around 1pm and told us exactly how to approach the fight. He said Phila must do everything from behind a stabbing jab, make every punch count and not allow Monyebane to be on the offensive - basically push him backwards all the time," said Sihle, who was in the corner with trainer Ncedo Cecane at Johannesburg's Portuguese Hall on Sunday.

Mpontshana did exactly as instructed from the first round and even dropped Monyebane in round seven.

"We did this for Bra Mzi. Phila fought according to all the instructions," said Cecane, from Mnguni's Eyethu Gym.

The champion trapped the challenger against the ropes before raining blows that sent Monyebane through the ropes in the 11th round to bring an end to the fight.

In the main supporting bout of the "Trilogy Festival Tournament" on Sunday - organised by Unleashed Combat Sport of promoter Shereen Hunter - Michael Mokoena was crowned Gauteng junior welterweight champion after forcing referee David van Niewenhuizen to intervene to save Tebogo Malose in the ninth round.

The bout is part of Mbali Zantsi's "Women Only" tournament at Kagiso Memorial and Recreational Centre on Friday night.

"Sandra said she was not ready because the fight was confirmed only Friday last week. Nxokwana outpriced herself," said Zantsi.

She added that Unathi Myekeni will oppose Ruth Chisale for the vacant WBF featherweight belt, instead of Asandiswa Nxokwana.