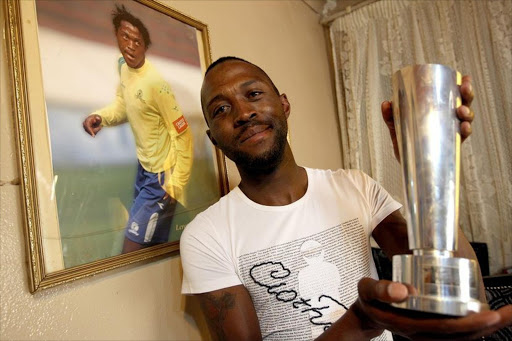 He used to be a high-flyer on and off the field, but now Lerato Chabangu has hit hard times with no income, no home and no car.

Forced to move in with his grandmother in Tembisa, the ex-Bafana Bafana star cut a desolate figure as he pleaded with PSL clubs to give him another chance.

His once flourishing career has stalled since his last club, Chippa United, dumped him more than a year ago.

"I blew all my money on useless things because I was always guaranteed a salary the following month," Chabangu told Sowetan.

"We used to finish training by 11am and thereafter you are free to do whatever you want. We would go to Shisanyama after training and chill there over a few drinks and it just became a habit."

Although he insists that he still has what it takes, the 32-year-old now resembles a shadow of what was once a prolific talent that blazed defenders with ease in the PSL.

The former Mamelodi Sundowns and Moroka Swallows striker lost his house in Boksburg and also had his car repossessed as he failed to keep up with repayments. He also used to rent a swanky apartment in Midrand.

"I separated from my wife because of financial issues and I do not see my (six-year-old) daughter anymore because she is with her mother.

"I have made many mistakes in my life and I feel I have learned my lessons. Things are tough and I am not the kind of person who likes to beg.

"I have nothing left. Football is all I know and I hope there's someone out there who can give me another chance."

The tattoos on his arms are the only remaining evidence of a high life once lived - of fast cars and beautiful women fighting for his attention.

"I used to afford expensive things. When the Golf V came out I bought it without thinking twice. And as you know women will always be there, but my main problem was booze."

As recently as three years ago Chabangu was in the Bafana mix during the tenure of Gordon Igesund at the national team. In 2014, following Bafana's exit from the African Nations Championship, he responded to Fikile Mbalula's jibe of Bafana players being "bunch of losers" by saying the then sports minister was also a "bunch of a loser".

With friends having deserted him, Chabangu spends his time with family in Tembisa and keeps fit by training at a local ground.

"My advice to footballers is to save as much money as they can. I know how hard it is, but they must just think of the future."