Msibi's head in the clouds 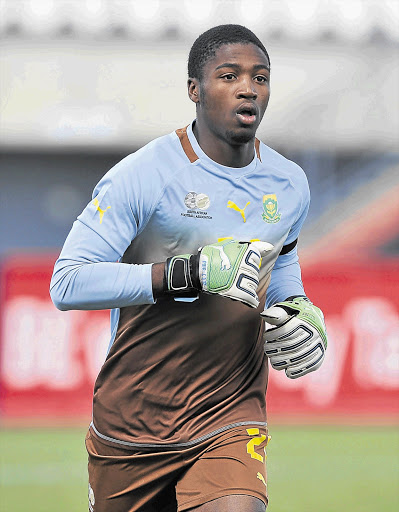 FOCUSED: Dumisani Msibi is ready for the big time, but wants to finish his matric first. Picture: BackpagePix

AFTER a surprise Bafana Bafana call-up for the Sudan and Nigeria Africa Cup of Nations qualifiers, goalie Dumisani Msibi had his head in the clouds.

The 19-year-old then buried it in his books during the 10-day Bafana camp, in preparation for his final matric exams next month.

Msibi spoke about being ready for the big time. But only after he gets confirmation that he can leave Holy Trinity High School in Atteridgeville will he be in the fast lane. He signed a professional contract eight months ago with Supersport United.

"My contract came with some conditions, which had to be changed. I gather there was a shortage of players in my position and I was asked if I would join permanently and sacrifice normal schooling. My focus is to finish my matric, so I told them I would prioritise that," said Msibi, who was selected ahead of teammate and Matsatsantsa first-choice goalkeeper Ronwen Williams by Bafana coach Shakes Mashaba.

"I brought my books to this camp. I have to keep studying. It's tough, but I am doing my best to catch up when I can. I've got seven subjects, with four majors in physical science, computer literacy, mathematics and English.

"It's not easy juggling a career in football and school. You come back from the gym tired and then you have to study, which becomes quite a challenge. You need discipline to pull this off."

Supersport still tabled an offer for Msibi, even after he made it clear that he would pick education over the limelight of the Premiership.

Perhaps this speaks to his quality as a goalkeeper in a country where there's no shortage in that position.

"Maybe the coach realised from the under-20 Cosafa Cup in Lesotho that I can handle the pressure. For now, I am happy to let it sink in and learn from the experienced guys. Next year, I will be ready to fight and show why I was picked by Supersport and the national team," said Msibi, who is yet to sit on the bench in a PSL match.

On teammate Williams, he said: "He works hard. We are boys, him and I. And I learn from him too. He was supposed to be here, but got injured, which reduced his chances. I think that also meant the spotlight was on me. As far as I am concerned, life really begins next year," said Msibi.

Supersport signed him up while Cavin Johnson was still the coach. With Boalefa Pule being sold to Bidvest Wits, it looked as if he would make his debut sooner . But in came Gordon Igesund, known to prefer the tried and tested.

"A lot of people think he doesn't use young players, but I see it as an opportunity to prove that he can build the team around us. All he has at Supersport is youngsters, and he won't sign anyone until maybe the next transfer window [in January].

"Until then, I believe we have a reasonable and fair amount of time to convince him otherwise. There's still so much to learn from guys like Thabo September, who have invaluable experience."

Mashaba said he didn't want to throw Msibi in at the deep end, but needed to make sure he didn't fall through the cracks after his sterling Amajita showing.

"He's our No 1 in the under-20s and rarely concedes a goal. I would have never thrown him into the lion's den, but I want him to learn from Senzo Meyiwa, a guy who has seen it all. Msibi has a strong character, sometimes a little bit silly in his mistakes, but we are working on this."