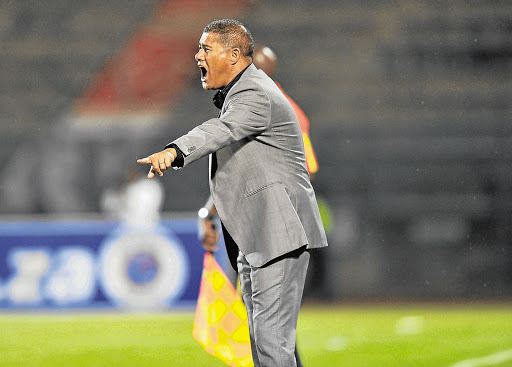 IT never quite looked like a match made in heaven, so it comes as little surprise that coach Cavin Johnson has been sent packing by SuperSport United four games into the Absa Premiership season.

He is set to be replaced by outgoing Bafana Bafana coach Gordon Igesund.

According to sources at the Tshwane club, Johnson's assistants Kwanele Kopo and Kaitano Tembo will take over as interim coaches starting with tomorrow's Absa Premiership clash away to Kaizer Chiefs.

Igesund's contract with the SA Football Association expires only on Sunday.

Johnson becomes the first coach to be sacked this season after a decision taken immediately after SuperSport lost to Mpumalanga Black Aces at the Peter Mokaba Stadium on Wednesday - a third defeat in four Premier League matches.

A statement confirming that Johnson will leave the club after a turbulent 13 months is expected today.

Igesund is expected to rope in Serame Letsoaka, his right-hand man at Bafana, as an assistant.

When contacted last night, Igesund denied he'd agreed to replace Johnson and would team up with Letsoaka and Alejandro Heredia.

"I haven't spoken to anyone and I don't intend on doing that because my contract with Safa only expires on Sunday. I have been reading in the newspapers and on social media about this job and I just laugh it off."

In his last words as head coach of Matsatsantsa, Johnson bemoaned missed chances and said his players were scared to lose and lacked tenacity.

"It was a poor loss against Aces. With all due respect, they were bottom of the log [before beating SuperSport] and we have quality players. We were just never able to punish them, maybe because the players also felt the pressure because we've only won one game. The problem is the mentality and tenacity when you are in the last third to be able to read the game," said Johnson.

As it turned out, his time was up at SuperSport, who handed him a three-year contract last June and tasked him with aiming for the league title and more.

But Johnson could not emulate the success of Gavin Hunt, a three-time championship winner in his six years with Matsatsantsa, and was given an ultimatum of four games after an MTN8 quarterfinal exit earlier this month.