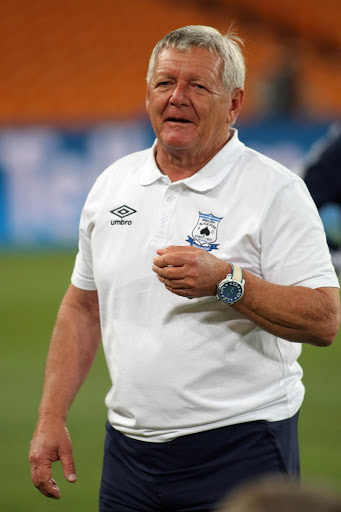 CLIVE Barker could soon call it a day, but the former Bafana Bafana and current Mpumalanga Black Aces coach has no timeline in mind just yet.

The 70-year-old Barker hinted at retirement after Aces' first Absa Premiership victory of the season when AmaZayoni beat SuperSport United 2-1 on Wednesday.

He pointed to homesickness as one of the things that could force him to pack it in sooner rather than later.

"I miss Durban," he said after the match. "One day you've got to close the doors and things like that.

"I love Durban and the day and time to go back will come.

"I am just glad that we were able to turn things around in our season because we caught it all wrong with eight players out from the team we had last season."

The 1996 Africa Cup of Nations winning coach with South Africa underwent a knee operation in the off season, and although he recovered in time to continue his work with Aces, he still limps.

Barker urged club bosses to hold on to the current squad to make it easier on his successor, whenever he arrives.

"We had to rebuild this season because players who were on loan went back and some went overseas. We had to start from scratch but the nice part about it is that outside of Aubrey Ngoma [who added to Collins Mbesuma's opener to help Aces to their win against SuperSport], there are no loan players. They all belong to Black Aces.

"So whoever takes over Black Aces will at least take over a team that belongs to Black Aces and doesn't belong to every other club in the PSL."