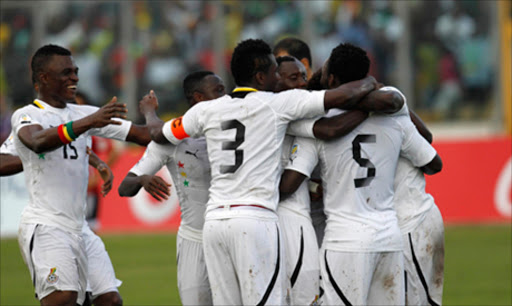 Eskisehirspor defender Akaminko picked up an ankle injury during the closing stages of the friendly defeat to the Netherlands on Saturday and is out for three months, while Leicester defender Schlupp and Helsingborg midfielder Accam also miss out from the original 26-man selection.

Appiah’s final squad includes 16 players contesting their first World Cup, but there is plenty of experience elsewhere, with captain Asamoah Gyan and Sulley Muntari preparing for their third finals and Jonathan Mensah, Michael Essien, Kwadwo Asamoah, Andre Ayew and Kevin-Prince Boateng about to contest their second.

Ghana travel to Miami for the final stages of their build up to Brazil, with one more friendly to come against fellow finalists South Korea on June 9.

Their World Cup Group G campaign kicks off against the United States on June 16th, before meetings with Germany and Portugal.

Robin van Persie scored early to set the Netherlands on their way to victory over Ghana on Saturday though a series of missed opportunities by Arjen Robben kept the score to 1-0.

It had threatened to be a runaway triumph for the Dutch, who like Ghana were playing their penultimate preparatory match before heading to the tournament in Brazil.

Instead, after van Persie had tapped home from close range in the fifth minute, it turned into an unconvincing display from the 2010 World Cup runners-up and their African opponents.

Van Persie’s goal came at the conclusion of a sweeping move involving Wesley Sneijder and Robben when Jeffrey Schlupp, the Leicester City full back playing his second match for Ghana, slipped at the crucial moment to allow for an easy finish.

It extended van Persie’s record-breaking goalscoring streak for the Netherlands to 43 in 84 internationals.