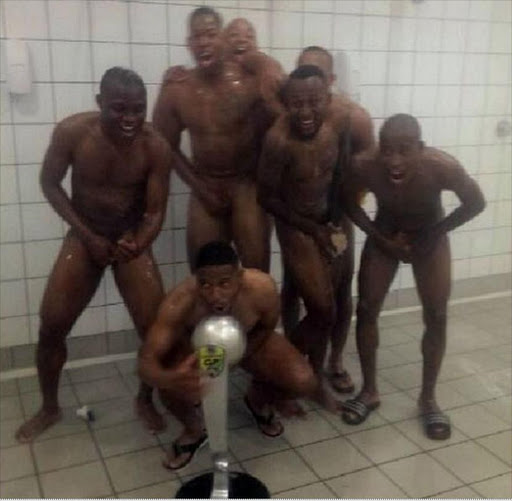 The Orlando Pirates players who appeared nude in a photo that went viral on social networks may have breached the club's social media policy, administrative manager Floyd Mbele said

"We have launched an enquiry into what transpired so we are able to get the facts, and once we've established the facts, we'll take it from there," he told Sapa.

"We have a social media policy in the club and the players are well aware of what it entails, so the process will be guided by the document.

"Based on the strengths of what we get from the enquiry, the consequences might be a formal discipline enquiry."

Orlando Pirates were crowned Nedbank Cup champions last Saturday, after they came back from a goal down to edge Wits 3-1 in the final at Moses Mabhida Stadium in Durban.

A picture showing Pirates players and their physiotherapist posing naked and in the shower, with the trophy, was posted on social networks on Thursday.

"I would like to apologise to everyone, the club, the sponsors, and all the people for posting that picture on Instagram," he wrote.

"At the time I thought it was a joke, sorry to my teammates... I sincerely apologise... bibo."

Mbele said this would be the first time the club tackled a social media issue and they would make sure things were done by the book.

"This is the first time that we are dealing with such an issue in the club and so we want to do things properly to avoid such things in future."

Mbele said he could not condemn the way the players celebrated because it was a norm in any sporting code.

"Who are we to condemn players for celebrating? I mean you can ask most sports codes and it's something that happens, so this is not unique to Pirates.

"The fact that it's out in the media is another thing, but how many players get into their dressing rooms and do funny things after winning matches.

"It's unfortunate that this has come out in public and that's what we need to deal with."