Pitso reveals winning PSL title is big for him 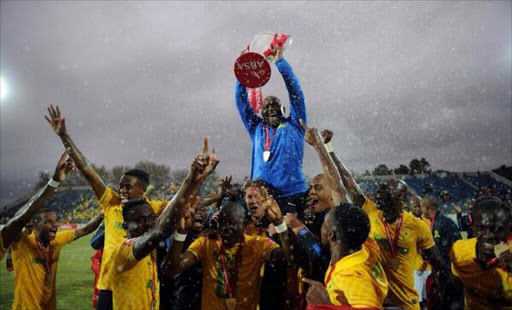 Mamelodi Sundowns coach Pitso Mosimane revealed that winning the Premiership title was the highlight of his career after their victory was rubber-stamped with the trophy presentation in Pietermaritzburg.

The Brazilians drew their final match of the campaign 1-1 against Maritzburg United at the Harry Gwala Stadium, four days after they had sealed the title with a resounding 3-0 win over SuperSport United.

"I've never won the league, so this is a big one," the former Bafana Bafana coach said afterwards.

"The biggest in my career I can say, what else do I have?

"It's the biggest title in local football and I envy and admire all the guys that have won this."

Their final points tally of 65 was also a record in the Premier Soccer League (PSL) era and Mosimane felt they had set a new benchmark for other clubs to aspire to after raising the trophy and winning the R10-million prize.

"It's a beautiful feeling because of the fact that we've had to wait so many years for this trophy," he said.

Until the final moments on Saturday, though, they looked set to suffer a first loss in 12 games.

Namibian international Heinrich Isaacks had given the hosts the lead after 34 minutes and they looked to be headed for a surprise win until Dutch defender and captain Alje Schut scored deep into injury time to rescue a point.

"This team is strong and the way we fought showed character," Mosimane said.

"It's 12 games undefeated and we'll be going again next year.

"I didn't mind conceding the two points to Steve Komphela. He's my brother, he protected me, he spoke well of me and the struggle of the black coaches and I'm happy to have been part of history."

His reference to black coaches was regarding a fact that none had ever won the title in the past, while the only South Africans on the list had been national coach Gordon Igesund and Gavin Hunt, who he had served as assistant to.

Ex-national captain Neil Tovey had also won the title, but as a co-coach with Argentinean Miguel Gamondi.

Mosimane thanked club president Patrice Motsepe for showing faith in him ever since his appointment around 18 months ago.

"Let's be honest, sometimes we get crumbs as black coaches and I have a president Mr (Patrice) Motsepe, who really believed in me and all of us," he added.

"He gave me the opportunity by entrusting me with this and we have the trophy."