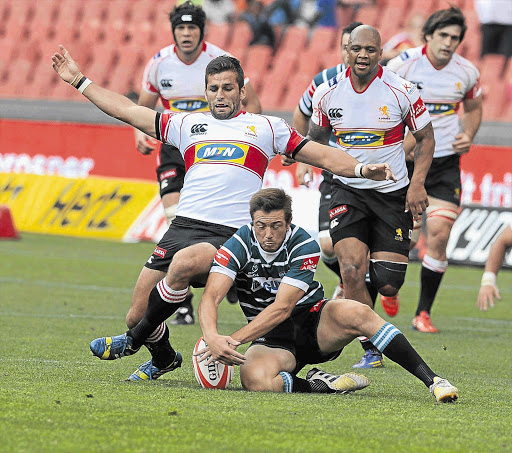 GOING DOWN: Kobus de Kock of the Lions and DuRandt Gerber of the Griquas during their Currie Cup match at Ellis Park yesterday. Picture: Gallo Images / Lee Warren

WESTERN Province held on by a hair's breadth to beat the Sharks 17-13 and top the Currie Cup log, taking with them the spoils of a potential home final at Kings Park last night.

Next weekend, the Sharks welcome the Free State Cheetahs while Province will face the Golden Lions .

On top of deciding who might host the final, this match served as the first audition for places in the Super Rugby side of Jake White, who was anointed the next Don of the Shark Tank Mafia this week.

White has a messiah complex: wherever he goes he feels the need to rescue people from the error of their ways. He believes the only type of rugby that should be played is winning rugby.

The Springboks were in disarray when he took over in 2003 and the Brumbies, who he's left to reunite with Sharks chief executive John Smit, were similarly disjointed.

He will look at the Sharks' remaining games to assess which players are worth keeping and which should be let go.

Last night, the Cape men forged ahead with their simple, bottom-line-oriented game plan and committed fewer unforced errors than the Sharks.

Having established an early lead, the Cheetahs won 22-7 after holding the Blue Bulls at arm's length to book their place in the Currie Cup semifinals in Bloemfontein yesterday, writes LIAM DEL CARME.

The Blue Bulls had the tough task of securing a bonus-point win and denying the Cheetahs a point to advance to the semis.

It always looked a bridge too far, especially as the visitors were held scoreless in the first 39 minutes.

Having built an early cushion, the Cheetahs simply backed their defence to keep the Bulls from their tryline and the semifinals.

The scoreline perhaps flattered the Cheetahs.

The visitors held the lions' share of territory and possession, and were blunt in attack, but the Cheetahs' defence was unremitting.

The Golden Lions scrapped their way to a 35-18 victory over Griquas at Ellis Park yesterday, but they will need to improve dramatically if they hope to earn a place in the final in two weeks, writes CRAIG RAY.

Four tries to one suggests that it was a comfortable romp for the Joburg team, but that was far from the truth.

It took a 77th-minute try from replacement lock Willie Britz to seal the win after poor discipline and the accurate boot of Griquas fullback Gouws Prinsloo kept the visitors in the match.

Prinsloo contributed 23 points from a conversion and seven penalties.