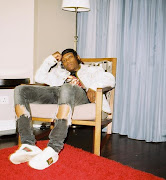 Just as we were trying to find our composure after Pusha T dropped fire on Drake this week‚ Speedsta had the local Twitter streets in a mess with his claims that Shane Eagles and Frank Casino had apparently blue ticked his collab requests. Now Frank has responded.

Speedsta warmed up his Twitter fingers properly on Wednesday when he brought more files than an AKA freestyle‚ accusing the two rappers of going M.I.A on him.

The situation reached level 101 when Junior De Rocka spilt more tea about Frank in an interview with YFM and said the artist apparently ignored him when he tried to get him on a joint.

We've been trying to get a hold of the pair harder than a panty salesman trying to sell to Zodwa‚ but Frank finally broke his silence on the claims to YFM's DJ Sabby.

"This stuff is not my thing‚" he said straight off the bat.

Asked if he gave a f**k about the accusations‚ he responded by saying; "I don't. I really don't."

He also said that he wasn't going to phone Speedsta to iron things out.

"I am really not entertaining this stuff. It doesn't do anything for me. I don't know if we still friends but I don't have to hit anyone up."

Meanwhile the internet has been going wild over the claims.