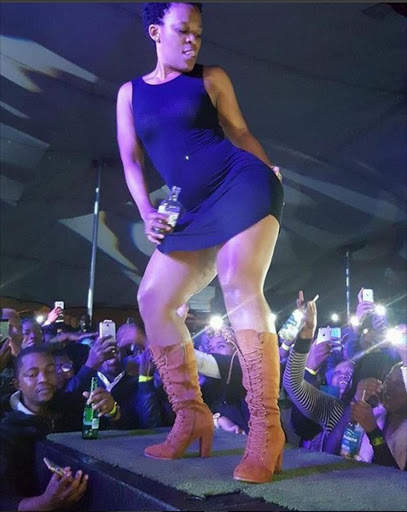 If you thought Zodwa Wabantu going to events sans underwear was scandalous‚ be prepared to get shocked all over again.

Zodwa has confirmed to TshisaLIVE that she is finalising a deal to appear at a strip club in Johannesburg.

She confirmed she has received communication from a well-known strip joint‚ The Summit Club in Hillbrow.

“Although we are yet to finalise the booking‚ I can say that I’m excited to go to the club. I also really want to do it because I can relate to the girls who work there. I have been called everything from a prostitute to stripper‚ so if I get called by a strip club‚ I’ll go without hesitation‚” she said.

She said after hearing from the club she decided to clear her schedule to accommodate the booking because she has always wanted to embrace the “stripper” name people have often called her by.

The Summit Club confirmed that it had shown interest in the socialite and were in the process of negotiating “money” with Zodwa.

The entertainer told TshisaLIVE that she wants to do “such” gigs not only for the money‚ but because society has to face the reality they have set up. She said people are quick to judge the women who strip or prostitute‚ selectively ignoring the fact that “if there was no demand‚ there would be no need for supply.”