Lotteries body at odds with journo 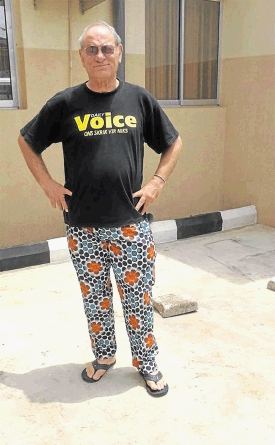 The National Lotteries Commission (NLC) has accused a freelance journalist of writing scathing stories about them after it stopped funding an NGO of which he was once a director.

The NLC made the allegations in a written complaint to the SA National Editors Forum (Sanef).

But veteran journalist Raymond Joseph laughed off the NLC's actions, saying the complaint against him was nothing but harassment and defamation to make him stop writing stories about the organisation's "corruption".

According to the NLC, the less-than-flattering stories Joseph had written about them were published on online news agency GroundUp since the beginning of the year.

They argue that Joseph's actions were tantamount to sour grapes after the NLC stopped funding The Big Issue (TBI), a Cape Town-based magazine published to empower homeless people.

Joseph said he never personally benefitted from being a director of the NGO and left its board in 2016.

"All directors of TBI were - and still are - unpaid and work on a voluntary basis. The funding from Lotto was used to help the most marginalised people in society, the vendors who sell the magazine and earn half the cover price for doing so. The Lottery grants were used for, among others, social development programmes, to fund social workers and to upskill vendors who sell the magazine.

"Not a penny went to any of the directors, and that is in TBI's constitution as part of a global network of street newspapers," he explained.

However, the NLC, through its spokesperson Ndivhuho Mafela, believes that the newsman has a case to answer at the Press Ombudsman.

"Further to the articles that form the basis of this complaint, the NLC has over the period in which it has been harassed by Raymond Joseph, noted his unethical and underhanded reporting and direct disregard of the [Press] Code.

"In light of the above, the NLC lodges this complaint in the hope that ... necessary corrective steps [will be taken] ..." reads part of the complaint.

Mafela said Sanef advised the NLC to forward the complaint to the Press Ombudsman.

Sanef has thrown its weight behind Joseph and accused the NLC of harassing and intimidating Joseph.

Executive director Kate Skinner said: "As Sanef, we are completely opposed to unethical behaviour. The NLC, however, has failed to prove this. It is imperative that they go to the Press Council and detail where they believe his articles have been inaccurate. So far they have failed to show where his reporting is inaccurate.

"Instead, they have embarked on a very personal campaign against him to try to prove that he is acting in bad faith and that the reason that he is investigating the NLC is because he was not given money by the NLC."

GroundUp editor Nathan Geffen also criticised the complaint, saying it has no merit.

He said he did not find any wrongdoing by Joseph as he had declared his involvement in The Big Issue before he resigned in 2016.

Public advocate at the Press Council Joe Latakgomo said: "The Press Council can confirm that Sanef copied us on an e-mail which was their response to the National Lotteries Commission. The NLC had complained to Sanef about Raymond Joseph. This cannot be described as a formal complaint to the Press Council.

"I e-mailed the NLC to send us details of the complaint for us to determine if there is a breach of the Press Code. I also pointed out to them that the Press Council deals only with complaints against member publications, not individual journalists.

"If, and when we receive a formal complaint from the NLC, we will evaluate it and determine the way forward."