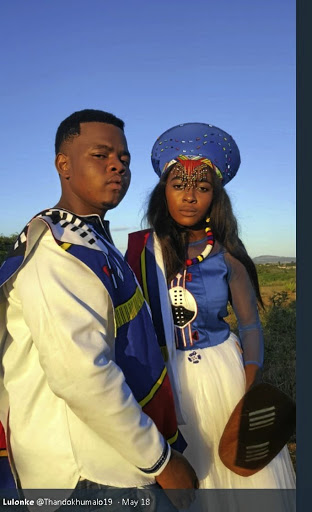 Siyacela Dlamuka and his wife Thando got married in April. Dlamuka has now left school to focus on his marriage.

Sunday World has learned that the 17-year-old, who became popular after appearing on DStv's Moja Love reality channel after proposing to his peer Thando Msomi last year, dropped out of his grade 9 studies at Ndlovana high school a fortnight ago.

The young couple tied the knot in a packed traditional wedding in Ulundi, KwaZulu-Natal, in April.

His father, Mthandeni Dlamuka, said he had received a letter from the school informing him that his son had developed a habit of sleeping in class, which negatively impacted his studies.

Mthandeni said the letter came after numerous meetings with teachers who complained about the same matter.

"I asked uMakoti [daughter-in-law] what the matter could be and she said they hardly sleep since they got married. She said they spend most of the night awake, behaving like a husband and wife.

"This issue bothered me, so I called social workers and police officers to help me. I want Siyacela to return to school and get educated like all other children," he said.

Mthandeni said he was happy that his daughter-in-law was still in school.

He said Msomi was his perfect makoti as she is able to juggle her wifely duties with her school work.

"When she comes back from school, she cooks and does the laundry but she always does her homework. It is just unfortunate that my son could not handle it anymore."

With the father's permission for us to speak to the young couple, Siyacela confirmed that he gave up on school.

"I could not control myself. Teachers complained that I was always sleeping in class, so I decided to [quit]," he said.

Thando said she wished her husband could return to school as she had hoped that they would grow up to be an educated and successful couple.

"I cannot say much as to why my husband left school. I really wish he would go back [to school]," she said.