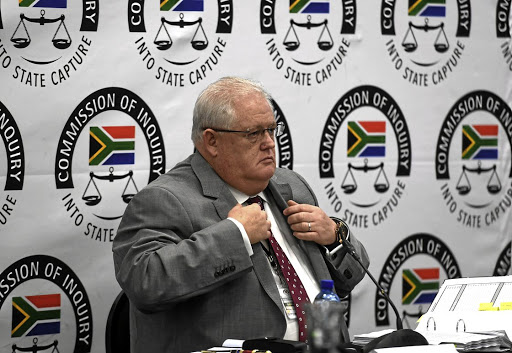 Disgraced former Bosasa boss Angelo Agrizzi, whose testimony at the Zondo commission is at the centre of the campaign funding controversy engulfing President Cyril Ramaphosa, is embroiled in another racism storm.

One of Bosasa's former directors, Trevor Mathenjwa, has accused Agrizzi of racism after the former CFO of the embattled organisation called him by the name of one of his pet monkeys.

Pictures of Agrizzi's wife, Debbie, and his Instagram account, show that they have two monkeys called Romeo and Juliet.

In the audio clip that was played at the Zondo commission earlier this year, Agrizzi is heard referring to Mathenjwa as "Romeo" in a conversation with some family members of the company's boss, Gavin Watson.

Agrizzi was talking about his run-ins with another black director of the company, Papa Leshabane. At the time of the revelation, nothing much was made of Agrizzi's references to Romeo in the clip.

"Papa used to get upset because I used to go out and do my own thing. I never waited for him because I haven't got time. Trevor, please, Trevor. A bomb can go off next to Trevor and he wouldn't even nudge. Really, Trevor is like, Trevor is like Romeo."

Mathenjwa told Sunday World this week that he discovered after Agrizzi left the company that Romeo was his monkey. He said Agrizzi had called him Romeo on many occasions in the years he worked with him from 2004.

Mathenjwa said he had thought the name Romeo was a compliment, taken from William Shakespeare's classic play, Romeo and Juliet.

He said he felt disrespected, hurt and disappointed.

State capture whistleblower Angelo Agrizzi will on Thursday appear in the Equality Court for his racist rant, which was recorded in an audio clip.
News
2 years ago

Asked whether he has raised the issue before, Mathenjwa said: "Remember, there are things he has already said about some of our directors, you know. There were names used. Remember besides the monkeys, he also used the k-word."

He added: "I have not taken any action, but that doesn't mean that I'm not going to or I'm going to. I'm still digesting what was said."

In the clip, which was played on Agrizzi's last day at the Zondo commission in January, Agrizzi is heard referring to Leshabane and Joe Gumede (another Bosasa director) by the k-word.

Agrizzi has since apologised after being dragged by the South African Human Rights Commission to the Equality Court. He reached an out-of-court settlement which saw him paying R200,000 to charity.

In July he told Power FM: "I was racist, I acknowledge it and I have apologised for it. I am not going to make an excuse for it, but if you ask me, I have never been racist for the 30-40 years or 51 years of my existence? My record speaks for itself."

"Knowing what I know now. I think he [Agrizzi] has total disregard for the black soul," he said.

Agrizzi did not respond to requests for comment by the time of going to press.