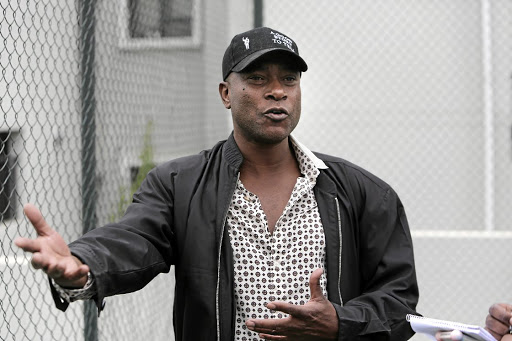 Doc Shebeleza can only afford to pay R10,000 a month until the debt is settled.
Image: Alaister Russell/The Sunday Times

Legendary musician Doc Shebeleza is barking at the Joburg high court to stop a Joburg company from auctioning off his multimillion-rand kennel.

Shebeleza's 22-room villa in Fairland was supposed to have been auctioned off on Thursday by a sheriff after an alleged failure to pay more than R120,000 to Simrock CC, a company which built a grotto room and a koi pond in his house back in 2006.

Simrock had obtained a court judgment to attach Shebeleza's ritzy mansion in 2006 after claiming that he had failed to pay them for the work.

But the Get Getsa hitmaker applied for a rescission of judgment and a court interdict to stop the auction of the house, which includes a nightclub.

The interdict application was supposed to have been heard on Tuesday last week but was removed from the roll as Simrock and Shebeleza apparently asked to try to resolve the matter out of court.

In the papers seen by Sunday World, Shebeleza pleaded with the court to grant him the order to interdict the sheriff from auctioning off his house. He said he did not owe Simrock any money because the features were not constructed by them, but by Erik Makarina.

"I have received notice of sale in execution of the premises, referred to in paragraph 2.3 supra, indicating the sale of the said property in public auction of the 1 of August 2019," read the papers.

Shebeleza, real name Victor Bogopane, also said his six children would be homeless if the property was auctioned off because it was his and their primary residence.

The Ingwazi crooner further said the company only dug up a hole without signing an agreement with him to do the work.

Star wants half of enstranged wife's estate.
News
2 years ago

He said he hired Makarina to complete the job because when it rained, the hole would be filled up with water, which could have potentially damaged the house's foundation.

Shebeleza said he was shocked to learn that the company had obtained a judgment and writ of execution to attach and sell his property.

He said that when he learnt of the plan to auction off his house, he consulted the company's lawyers and made an arrangement to pay them R10,000 a month until he settled the debt but they refused and said they would only accept R30,000 a month.

Shebeleza said he realised that the company was not willing to recover the money but was only interested in selling his house because they knew he could not afford the amount they wanted him to pay.

Sunday World was unable to solicit comment from Simrock's lawyer, Ilze Mattheus of Van Der Merwe & Associates, as one of her colleagues who answered her phone said she was too busy to talk to us.

Shebeleza's lawyer Lucky Dakile declined to discuss the matter with us.

Guarantor heads to court over bond arrears.
News
2 years ago
Next Article