'Mistress has done something to him' 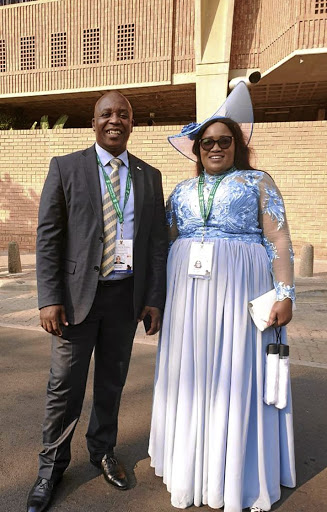 Phumulo Masualle with his new bae Lorna Maqungo. The woman is accused of dividing the former premier's family.

Fuzie Masualle spoke to Sunday World this week after the former Eastern Cape premier started displaying his new bae in public, including at the recent State of the Nation Address in Cape Town and the State of the Province Address in Bhisho, Eastern Cape.

She also claimed that Masualle had already paid ilobolo for his new woman.

The couple's acrimonious split started as early as 2017, but went into overdrive when Fuzie was allegedly entangled in a plot to kill the politician.

Fuzie, 36, denied the allegations in January last year, saying that she, in fact, was the victim of the threats. Masualle, however, vacated their matrimonial home in May.

Now Fuzie is accusing the new woman in Masualle's life of wrecking their home after she allegedly did a smash and grab on her before fleeing with the politician.

Fuzie said Lorna Maqungo was responsible for the breakdown in her marriage, charging she was Masualle's nyatsi for years while they were still happily married.

Maqungo, 30, a businesswoman from Masualle's home town of Mount Fletcher in the Eastern Cape, declined to comment on their relationship.

"Where did you get that from? Please, I have nothing to say," she said and hanged up.

"I don't comment on domestic matters," he said, before putting the phone down.

Fuzie said she would fight "tooth and nail" through the courts to ensure that the "marriage" between her estranged hubby and Maqungo was declared null and void because "I am still his legal wife".

Nyatsi can be your beneficiary

The dependants you elect may not be the sole beneficiaries of your pension or retirement fund when you die.
Business
3 years ago

"I have already consulted with my lawyers and I will definitely see him in court soon. This is the last straw after what this man put me through," she said.

Fuzie said the former premier became "a completely different man" to the one she married after "allowing a snake to deceive him". She alleged that their marital problems started when he allegedly cheated on her with Maqungo.

"He started arriving home in the wee hours of the morning, smelling of women's perfume and when I confronted him about this, he became defensive and denied cheating on me.

"I started receiving insulting messages on my cellphone from an anonymous woman who ordered me to leave Phumulo alone," said Fuzie.

"I then conducted my own investigation and found that the other woman was Lorna."

To add to her woes, Fuzie said she got the shock of her life when some of Masualle's relatives informed her in December that he had paid ilobolo for Maqungo and later introduced her as his new wife during a traditional ceremony held in Mount Fletcher.

She said she felt vindicated after Masualle's relatives apologised to her and revealed that the former premier had turned his back on his family after marrying Maqungo.

"That woman is a pathological liar who is out to divide the family. She has done something to him. Ever since he allowed that woman into his life he has never been the same.

"He used to adore our daughter, but [now] he doesn't even phone to check up on her or support her. I am praying that one day he will see that woman for who she truly is," said Fuzie.