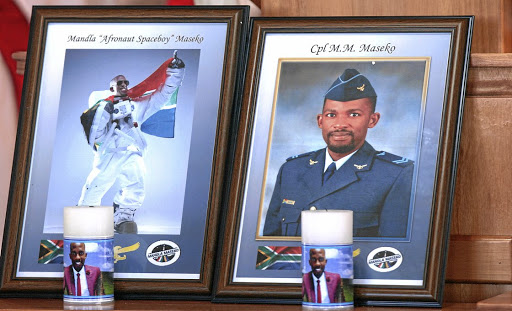 Portraits of Mandla Maseko were displayed at his funeral in Mabopane.
Image: Ziphozonke Lushaba

Yesterday's funeral of Mandla Maseko, popularly known as Spaceboy or Afronaut, in Mabopane, outside Pretoria, gave a small glimpse into his remarkable life.

Maseko, who died at the tender age of 30 after a motorbike accident last Saturday, was interred at the Zandfontein Cemetery in Tshwane after a colourful service.

Maseko, born in Soshanguve and raised in neighbouring Mabopane, gained international fame after he won a competition in 2013 to become one of 23 winners worldwide to go to space.

The competition was run by the Axe Apollo Space Academy and winners had to train for the expedition at a US space academy.

Maseko was going to be the first black African in space.

He went to the Kennedy Space Centre for a week to do tests ahead of a planned one-hour suborbital flight on board an XCOR Lynx Mark II that was planned to take place in 2015. However, the flight did not happen as XCOR Aerospace went bankrupt.

Maseko would have been the third South African in space, after Mark Shuttleworth in 2002 and Mike Melvill in 2004.

The SA Air Force brass band and top officers led the ceremony as Corporal Maseko was one of their own. He joined the SAAF in 2015 and qualified as a pilot. He was the administrative head of the Thusano Project for the SAAF cadets going to study in the aviation and technical field in Russia and Cuba.

Before joining the airforce, Maseko studied civil engineering and trained as a private pilot.

As a young man full of life, Maseko was also a member of the Tshwane Legends Bikers and Corsa Utility Mzansi, a club for enthusiasts of the half- ton bakkies commonly known as Side Pocket in Tshwane. 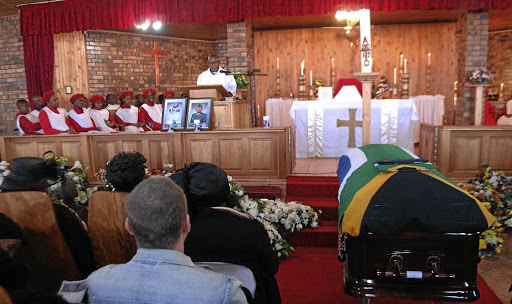 His fellow members announced their arrival with a roar, riding all sorts of motor bikes while the SAAF band blew mourners away with their bag pipes.

Steven "Guluva" Ntlatleng of Tshwane Legends complimented Maseko for all the good work he had done, including taking care of all their female members.

He described Maseko as a caring and loving person who tried his best to ensure that everyone around him felt safe.

"He was a star of his family, community and country. Though he left too soon, he accomplished his life's assignments. He lived the life of service and served with distinction," he said.

He is survived by both his parents and four siblings.

Mandla Maseko who beat a million people to win a sub-orbital trip that could have seen him become the first black African in space has been killed in ...
News
2 years ago
Next Article