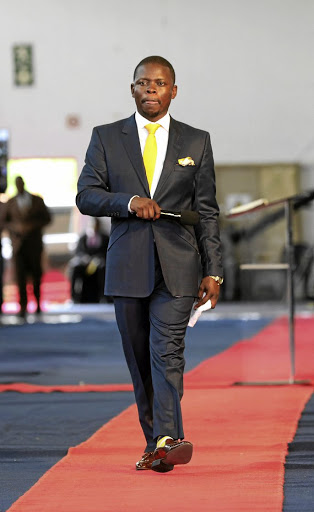 A senior pastor close to prophet Shepherd Bushiri has accused the Hawks of using a "spray-gun" tactic in their investigations against the controversial church leader.

"The situation is so bad that Bushiri had to ask his lawyers to send the state letters ordering them to respect the law and not use underhanded means in their investigations.

"Our view is that the state has become desperate to make the case against Bushiri stick, and so they're flouting their own rules," said the senior pastor, brandishing copies of the letters. He declined to be identified for fear of victimisation.

Bushiri's Sandton-based lawyer Victor Nkhwashu confirmed to Sunday World that he wrote letters to the State Attorney's office but could not comment further.

"I can't talk to you. You know that this matter is sub judice. The answer is no comment," he said.

In a letter seen by Sunday World dated May 29, Nkhwashu seemed displeased with the Hawks' disregard of his initial letter directing them not to make contact with his client in his absence.

"Despite our previous letter, on 23 May 2019, you have communicated with our client directly through an e-mail making certain enquiries pertaining to the acquisition of the aircraft and other unrelated queries. We urge you to respect and to please follow due process," writes Nkhwashu, directing the Hawks to liaise with him directly.

In an earlier letter dated April 28, addressed to a Colonel Maritz of the Hawks and advocate S Veenemans of the State Attorney's office, Nkhwashu identified five people linked to the prophet who were allegedly targeted for questioning by the Hawks simply because of their association with Bushiri.

"The purpose of the visit was initially not explained to these individuals," writes Nkhwashu, noting he represents all people who wrote confirmatory affidavits to Bushiri's civil application to have his private jet, temporarily seized by the state, returned to him.

"We hold an instruction that Colonel Maritz and Marais has, on April 26 2019, visited our clients' SBI premises [in Sandton]. We request and urge that you should not visit any of our clients' premises unless permission is sought and granted by us in writing, [or] alternatively, [when] you are authorised to do so by a warrant or any form of a court order," reads part of a letter written by Nkhwashu.

The pastor said: "The Hawks have arrested Bushiri, now they are harassing the people around him. My view is that they are desperate to sow division in the hope that someone will turn against him. In the jet application, the Hawks said he can't explain the source of his income but he has responded in the civil court and provided a spreadsheet showing where the funds came from. This is now public record.

"I don't understand why we must live in fear for working with a servant of God."

Bushiri faces a two-pronged mission from the Hawks: a forfeiture application in the high court for his R17m private jet that the state believes was bought through the proceeds of crime; and a criminal case in the specialised commercial crimes court where he was accused of fraud and money laundering.

Hawks spokesperson Hangwani Mulaudzi said none of their officials could harass people without following proper procedure.

"The lawyers have an option to report the matter to the head of the Directorate for Priority Crime Investigation (DPCI) or any judge. Whether the Hawks have a case or not, it is not up to us, it up to the prosecutor or the judge who will be handling or presiding over the case," he said.

Major 1, as Bushiri was known to his flock, and his wife Mary are out on bail of R100,000 each after being nabbed in a dramatic arrest in February on charges of fraud and money laundering.