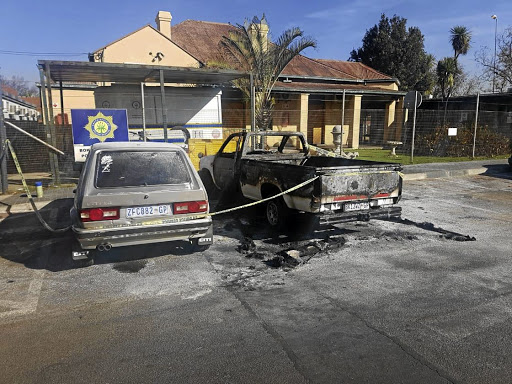 The remains of Sylvester Masimo's car that was allegedly burnt by his ex-girlfriend outside Boksburg police station.

The woman accused of burning her boyfriend's car has broken her silence and says she did not do it but that the man's other nyatsi swore at her.

Even though Audrey Kagande from Tembisa said she did not commit the crime, she told Sunday World that she became enraged after another woman answered her boyfriend's phone when she called.

The fire incident happened outside the Boksburg North police station on Youth Day.

Among other epithets the second girlfriend threw at her, she said, was that she told her her punani was not nice and that she was an unhygienic woman who did not bath regularly.

Kagande, 47, who was released on free bail last week after spending two days in freezing cold police cells following her arrest, said she was hurt by what her bae Sylvester Masimo did to her.

"I have been involved with him since 2009," she said. "Even his wife, who is based in Zimbabwe, knows about our relationship. In fact, his wife gave him her blessings to take me as a second wife. However, this other woman from Germiston has been trying to ruin our relationship.

"He came to my place and I went to his place whenever I wanted to. So, on the day in question I called him to tell him I was on my way to visit him but he didn't answer the phone.

"I sent him messages but he ended up blocking me on WhatsApp. I got suspicious that he might be with another woman.

Deceased alleged to have taken 'vuka vuka' before sex.
News
2 years ago

"I then went to his place in Boksburg but he was not there. When I called again another woman answered his phone and swore at me."

Kagande said what Masimo told Sowetan newspaper last week - that the woman was his wife - was a blue lie.

This was after reports that the couple had arrived at the police station on June 16 to seek intervention for the fight they had had.

However, Kagande's version of events was that she didn't even know he was taking her to the police station at the time.

"On Sunday when he returned from this other woman, I confronted him about the woman who answered the phone. He then said to me, 'let me take you to her place so that she can apologise to you', only to end up at the police station," she said.

"Why would he say there was no relationship between us when he continued to come to my place to sleep with me? Just because he had another woman to warm his bed he denied me? Why would I burn his car at the police station when I had a chance to burn it the previous day at home while he was away with his nyatsi?" she asked.

Thomas Mabelane was lucky to escape with a minor injury to his face after his side chick of 15 months attacked him during a lovers' tiff last week.
News
2 years ago

Kagande insisted that the woman who answered Masimo's phone was not his wife as she was in Zimbabwe.

Masimo told Sunday World that Kagande got violent when he told her she must never set her foot at his place again.

"That day she called me and said she wanted to see me and I asked her 'what for because we were no longer together?'. She was forcing herself on me. I blocked her calls and messages because she was calling and shouting at me," he said.

Masimo confirmed that his wife knew about his relationship with Kagande but denied that she gave them blessings to take her as a second wife.

Police spokesperson Justice Ramaube confirmed that Kagande was released on free bail and her case was provisionally withdrawn due to a lack of evidence.