Singer Msaki to be a mother again 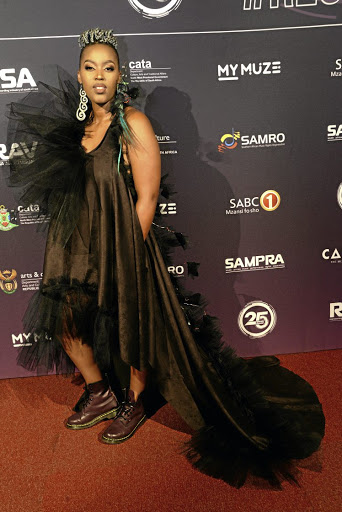 Msaki appeared at the Samas last month without anyone noticing there was a bun in the oven.
Image: Gallo Images

Singer-songwriter Msaki's well-kept secret is soon to be unveiled.

Sunday World has learnt that the Fetch Your Life singer, real name Asanda Lusaseni Mvana, is expecting her third child in September.

Msaki, 31, confirmed through her management that she and hubby are expecting their third bundle of joy and she was going on maternity leave in August.

She was unable to speak to Sunday World directly due to the news that her childhood friend, from her hometown in East London, Eastern Cape, had passed away this week.

However, her manager Boitumelo Mtimkulu said her client was excited about her pregnancy.

Like most mothers, Msaki wanted to keep their pregnancy a secret.

According to Mtimkulu, the singer was actually surprised that Sunday World had learnt that she was expecting because many people had not noticed that there was a bun in the oven.

"I am surprised that you guys even know because there hasn't been a thing. We have done so many gigs, TV shows and interviews but no one has asked if she was pregnant," said Mtimkulu.

The Sondela singer, who was looking dazzling at the Samas last month, is six months into her pregnancy but did not want to reveal the unborn baby's gender.

"She is very excited for her baby and she will be taking it easy from now until she gives birth," Mtimkulu said.

Msaki and Tresor will be to blame for the baby boom that the country will experience nine months post winter.
Entertainment
3 years ago

The East London-born star's music career has grown with her first solo album titled Zaneliza, which was released in 2016. She is currently topping the music charts with house tracks Fetch Your Life, featuring Prince Kaybee, and Wish You Were Here, featuring DJ Black Coffee.

Mtimkulu said that despite Msaki taking her foot off the pedal, she would still do a few gigs around the country and will be hosting a fund-raising concert for the victims of the Sudan civil war at Newtown Music Factory, in Newtown, today.

"She will continue with Alt Blk Continua because it's not something which is too strenuous on her and the show in Grahamstown which she curates will not be affected.

"I think women can do absolutely whatever they put their mind to."

Msaki has been a mother twice before while doing her gigs and touring the country and other countries, and she has done it exceptionally well.

"A lot of people didn't realise that she was pregnant, that is how much she puts into her work," said Mtimkulu.