'My hubby's a gold digger' - Motsepe 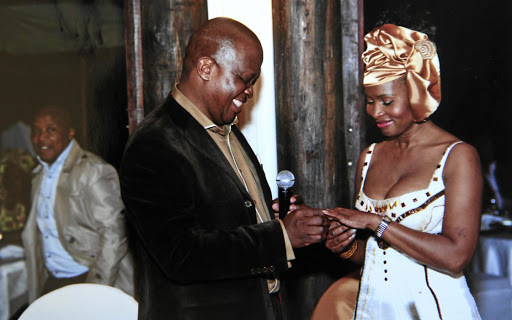 Former Telkom Foundation CEO and Mamelodi Sundowns owner Patrice Motsepe's cousin Reabetswe Lucia Motsepe is facing a R40m defamation lawsuit filed by her ex-husband over claims she allegedly made that he was a gold digger, thug and an ex-convict.

Advocate Modise Geoffrey Khoza SC filed the summons at the Joburg high court against his ex-wife on Tuesday, demanding that she fork out the millions in "damages he suffered" for allegations made against him.

The two former love birds who married twice before being embroiled in a bitter marital dispute in 2012 and 2016 , had exchanged serious allegations against each other.

Among the allegations, some of which were made in e-mail exchanges annexed to the defamation lawsuit by Motsepe, were that Khoza allegedly hired two assassins to kill his wife on the day of their marriage.

That, according to the papers and e-mail annexures, was to happen if she had refused to sign a prenuptial contract.

Khoza had also accused his wife of infidelity, claiming that she was "lowering her panties for a police officer" at Norwood police station in Joburg in order to get him arrested on assault charges.

Motsepe had alleged that her hubby abused her physically two weeks into their marriage in 2012.

But now Khoza is going for the jugular as his defamation suit against Motsepe details numerous incidents, arguing that she defamed and injured his good name to destroy his reputation.

The claims, according to the court papers, were all related to statements made between 2016 and 2018.

The first claim, the papers show, was based on a message allegedly sent by Motsepe on November 26 2016 to Khoza's friend, advocate Mandla Zulu, who is now deceased, in which:

Khoza said as a result of the message, he was evicted from his rented house in Bryanston by Zulu.

The papers show it was related to an e-mail allegedly sent by Motsepe on November 14 2017 to the National Prosecuting Authority (NPA), in which it was alleged that Khoza was a thug and ex-convict who had sacrificed the life of some person to take over his jail term in Bloemfontein.

"She further said the plaintiff had his criminal record wiped out illegally, was an organised crime fugitive, was being protected by the NPA, and that his criminal activities were known by the Bar Council (Johannesburg Society of Advocates) who were scared to act against him because of fear of assassination."

This was based on an e-mail allegedly sent by Motsepe on December 4 2016 to his family members and friends in which she allegedly claimed that Khoza had hired people to kill her.

It was also based on another e-mail allegedly shared by Motsepe on December 19 2016 with Khoza's family members and friends in which she allegedly accused him of spying on her and allegedly calling him a mentally derailed lunatic.

"She further alleged that the plaintiff was a gold digger, who married her in order to boost his image."

It centred around an e-mail allegedly sent by Motsepe on September 5 2018 to a senior member of the judiciary in which she alleged that Khoza had tricked or coerced her to enter into a prenuptial contract a few hours before the blessing of their marriage.

The papers show that Motsepe said that her husband was an extraordinary abuser and a thug and that he had threatened the lives of officials who stood in his way to allegedly abuse her. Khoza said in the same e-mail, his wife advised that her husband's application to become a judge should not be considered.

Khoza said he was suing his ex- wife for opening a case of assault against him on April 23 2016.

He said Motsepe influenced the members of the South African Police Service at Norwood to arrest, lock up and charge him, claiming that she had suffered injuries due to the alleged assault.

In the papers, Khoza said the allegations were false and maliciously made with the sole purpose of instigating his arrest and prosecution, and that they were later withdrawn.

The papers show this claim was informed by a picture of Motsepe's daughter, which Khoza alleges she sent to a senior member of the judiciary, depicting her with blood on her head and face. "In the accompanying e-mail message, the defendant wrote, interalia: These are just a few examples of the assaults by Khoza SC."

Khoza said the statement and picture were wrongful and defamatory in that they were intended and understood by the judge to mean that he was responsible for the injuries suffered by her daughter.

"I have not yet received the summons but will wait and see if they will come. Anyway, you cannot sue someone for telling the truth unless if you are stupid because you will be exposing yourself more.

"He confided in my sister about his past and it was not a gossip, but the truth. I did not know his past when we got married. He confirmed that to my sister."

When asked if she called Khoza a gold digger, Motsepe said she said that in retaliation after he had also labelled her a gold digger.

"He is the one who drained me of my assets including properties and cars. I also fed him and his entourage but yet he has the audacity to call me a gold digger."

Responding to claims that she had an affair with a police officer at Norwood police station, Motsepe said the claims were a desperate attempt by Khoza to conceal his numerous mistresses who had been harassing her at their matrimonial home in Houghton two weeks after they got married.

"I'm a very decent woman and I can't relate to allegations of lowering my panties to police officers. But I can't say the same thing about him. I can't even count the number of his mistresses. More than seven of them showed up at our gates in Houghton looking for him."

Motsepe also claimed that Khoza had installed more than seven cameras to monitor her at their home and even hired a driver for her.

She further said Khoza owed her about R1m in spousal maintenance which he is refusing to pay.

"He got me to sell all my assets but he put his assets into a trust, which is led by his ex-wife," she said.

Motsepe, a diamond miner, said even if Khoza was to succeed in his application, she did not have the kind of money he was demanding from her.

"I don't have R40-million unless if it will come from our joint estate. He will have to pay himself because he puts everything into a trust account," said Motsepe.

"I confirmed that I filed a defamation lawsuit against her.

"The police chose to arrest me because my ex-wife had a relationship with the officer."

Khoza, left, said his ex-wife was lying that he was a gold digger, saying that instead she was the one who created an impression that he married her because he wanted to be closer to her cousin Patrice.

"I only found out later that she was cousins with Patrice Motsepe. But I already knew Patrice at that time.

"Besides, I later learnt that they were not even close. She is just a gold digger, not me," Khoza said.

He said Motsepe came into their marriage with nothing, and was unemployed.