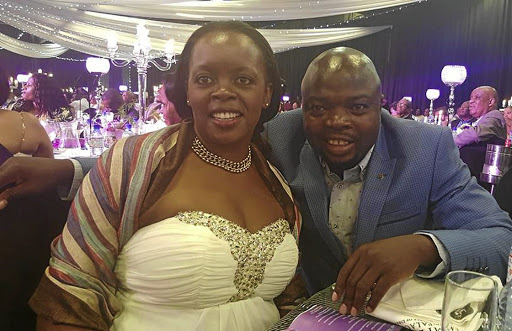 Pastor Enock Phiri and his wife of 18 years Busisiwe during happier times.

Popular televangelist and motivational speaker pastor Enock Phiri's wife Busisiwe allegedly dumped her husband and then later went to celebrate their separation at a local tavern with a friend and cousin.

These details emerged last week after the congregation of Phiri's church, Restoration House Ministries in Soweto, stumbled upon a video of their pastor's wife at what looked like a tavern dancing and singing along to Karyn White's classic I'd Rather Be Alone.

In the video, which Sunday World has seen, Busisiwe could be seen in the company of two other women singing and dancing without a care in the world, while other patrons look on in shock.

"Look at her, she must be a very happy woman. Look at the pastor's wife in the tavern," one patron could be heard saying in the video clip.

It appeared as if it was the video clip that helped members of the church to uncover the news that their pastor's marriage of 18 years was on shaky ground.

Pastor Phiri, a TV show host and presenter of Taking Dominion on DStv's TBN on Africa channel, confirmed that his marriage was on the rocks but argued that he was a normal human being, experiencing the same problems that other people faced in their marriages.

When Tinyiko Masemola joined a church in Ekurhuleni she was hoping to receive prayers and find a job‚ but instead she was consumed by drama that left ...
News
3 years ago

Fight over the body of church pastor’s wife

The nephew of the late ANC stalwart Alfred Nzo is embroiled in a bitter battle with his in-laws over the burial of his late wife.
News
2 years ago

He said that he was now residing alone at his farm in Walkerville, south of Joburg, and said his wife now lived in Mondeor, also in the south of Joburg.

"I don't want talk more about this matter because it's too private," he said.

Busisiwe declined to comment about the allegations that her marriage was imploding, only opting to respond to the video clip.

She, however, confirmed that she and the man of the cloth were no longer singing from the same hymn book as they were living apart.

"I was at a Metro FM Soul Session event in April with my sister and my cousin and we were having fun.

"I know there are people who say I was at a tavern, but I was not," she said, adding that such people only wanted to ruin her name.

"I was singing along to Karyn White's song I'd Rather Be Alone and I understand why people would believe that I was celebrating the end of my marriage.

"But I don't believe that is what I was doing."