Mom's death a dampener, but show goes on for Zikhona Sodlaka 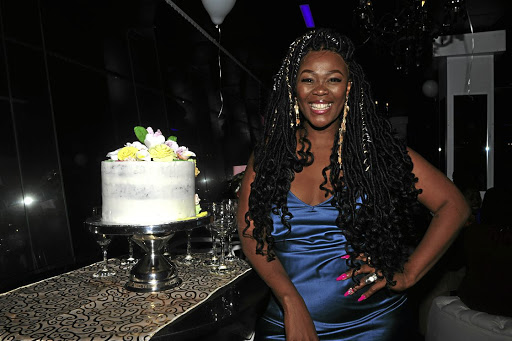 Zikhona Sodlaka celebrates her birthday and the Naledi award at the Rooftop Lounge in Honeydew this week. / Veli Nhlapo

Igazi actress Zikhona Sodlaka celebrated her 34th birthday and her latest achievements with a heavy heart this week.

She told Sunday World at her bash on Friday night that the decision to celebrate her accolade in conjunction with her birthday came after a lot of persuasion from friends, family and colleagues in the industry.

"It was challenging for me to decide to celebrate my birthday this year with the recent loss of my mother.

"However, it's not everyday that one is celebrated in the arts for the work that they do and certainly not with a Naledi award which I have to say to date is one of my most coveted awards.

"My mother was a huge supporter of my work. She would have celebrated with me and would have wanted me not to miss the opportunity to celebrate, and it's for that reason that I was swayed to celebrate my birthday and my Naledi award," she said.

The actress, who was once nominated for the South African Film and Television Awards (Safta), rose to fame 14 years ago when she landed her debut lead role on SABC1 drama series Tsha Tsha. The series received an Emmy nomination for the Best Foreign Language Drama and extended her popularity beyond SA.

She has also featured in internationally produced films such as Long Walk Freedom, where she played the role of Nelson Mandela's mother alongside British actor Idris Elba, who starred as Mandela.

Zikhona's talent extends beyond the small screen and film as she also dabbles in stage performance. At her intimate  soirée held at the Rooftop Lounge in Honeydew, west of Joburg, she said having a career that had acknowledgements such as the SAFTAs and the Naledi Awards meant she can't lose focus. "When you do your craft as if it's a job, you don't lose focus," she said.

Among her industry friends who attended the do were Nambitha Mpumlwana, Khayakazi Kula and Aubrey Poo.

Thabethe having lots of fun gigs.
Entertainment
3 years ago
Next Article