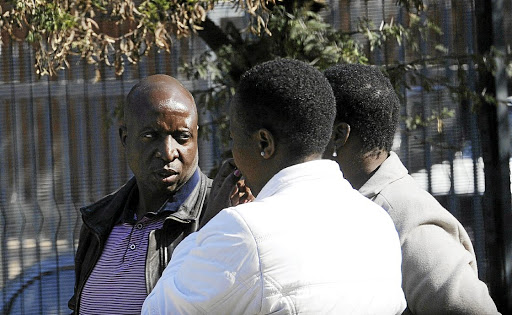 Father of 14 Mzamani Manganyi was sentenced to 15 years in jail in the Palm Ridge magistrate's court for robbing his father of R2m of his lottery winnings.
Image: Veli Nhlapo

A former senior police officer was this week sentenced to 15 years in prison for stealing nearly R2m from his father's lotto winnings.

Disgraced former warrant officer Mzamani Manganyi was sentenced at the Palm Ridge magistrate's court after being convicted of fraud he committed in 2014.

Magistrate Brian Nemavhadi looked directly into the eyes of the accused and jogged his memory as he told him of how his 86-year-old father, Mkhatshane Manganyi, shed tears as he was telling the court how his own child stole his money.

"Your father's house is said to be falling apart and you still insist that you will not pay him any money back and you still stand firm that you are innocent though the court of law found you guilty last year. This really shows no remorse.

"A complainant, who is now a pensioner, once a millionaire, has been now left to beg because of his unruly son," Nemavhadi said softly before he could sentence the 45-year-old father of 14.

Probation officer Dorothy Matumpa had presented a 13-paged probation report which detailed the life of Mzamani before and after the incident.

The report found that the former police officer, who was based at Protea police station (in Soweto) during his days in the service, was an active community member and a churchgoer but had neglected his family since he was found guilty of stealing his father's money.

"The offender indicated that he is not remorseful as his father had asked him to transfer the money into his account.

The money made him crazy - father.
News
3 years ago

"He mentioned that he cannot apologise for something he didn't do. He also reiterated that his father is also old in a way that he cannot remember his decisions ...," reads part of the report.

Another report presented by correctional officer Nape Mapitsa also found that the relationship between Mzamani and his family soured after the money went missing.

According to court documents, the convicted fraudster forged his dad's signature to access the old man's savings and diverted the money to his personal account.

"During October 2006, Mkhatshane George Manganye (the complainant), won an amount of R6,113,744 from the national lottery. He invested R4m with Absa .

"Mzamani Collars Manganye (accused) is the son of the complainant. During 2018 an application for cession of the Guaranteed Growth Capital investment was made . for R1,928,950 payable to the complainant .," reads the charge sheet.

Mkhatshana told Sunday World that he was happy that the law took its course and that his son has been thrown in jail.

"I still don't understand why he stole from me. He hurt me and he must pay for it," he said.