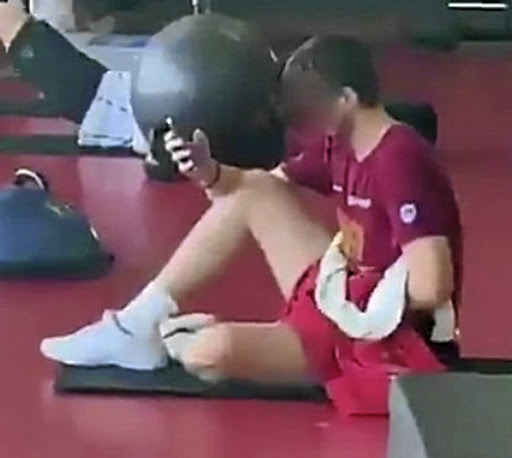 A gym goer caught red handed pleasuring himself in public could be off the hook for now, with police confirming that the matter had not been reported.

Police spokesperson in the Western Cape Col Andre Traut told Sunday World that cops have not been roped into the matter at this stage.

"It hasn't been brought to the police as of yet. There is no case opened," said Traut.

On Thursday, the exercise enthusiast was filmed by a fellow gym member at the Stellenbosch Virgin Active as he masturbated a few metres away from other members.

The five-second clip of the the man, dressed in red gym gear and seated on an exercise mat as he vigorously pleasured himself, quickly went viral.

The man is seen with a towel covering his private parts as he gazes fixedly at his cellphone with his other hand in his shorts making frantic movements.

His hands fondle his private parts while a woman and another man continue with their exercises unaware of his actions just a few metres away from him.

After his indecent act was exposed the gym subsequently issued a statement on Friday and banned the man for life.

My hubby masturbated on our honeymoon

I was so embarrassed I went out for a day of sightseeing without him.
Good Life
3 years ago

Virgin Active spokesperson Carla White told News24 that after they were made aware of the video circulating on social media, the member was identified and banned with immediate effect.

"Our clubs are shared spaces and we will absolutely not tolerate depraved behaviour."

Clinical psychologists who weighed in on the video that continued to trend this weekend advised that the man needed to be helped.

Fisha said the man shows signs of being an exhibitionist, which is a person with a disorder that urges them to show off their genitals in a public space in order to stimulate themselves.

She said seeing the man on the video was one of the more extreme exhibitionist acts she has ever come across in her years of practice.

The doctor added that she could not diagnose him properly based on the video she saw but would rather have a professional chat with him to fully understand what could be the problem.