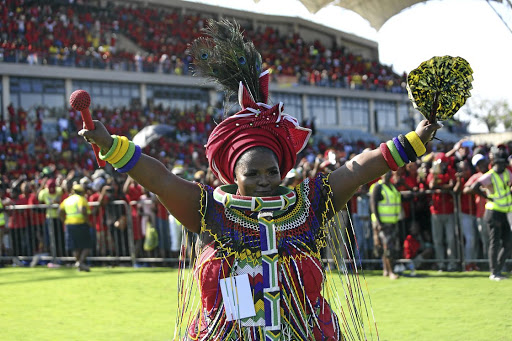 Award-winning poet Jessica Mbangeni, who has become the latest celebrity to be body-shamed by social media, has lashed out at her haters.

The Eastern Cape-born poet, who features in Afropop singer Vusi Nova's hit song Asiphelelanga, has been posting loved-up pictures of herself and Nova on social media but it seems fans have been reading too much into it.

In some of the pictures, the renowned poet and Nova can be seen cuddling. There are even some where Mbageni plants a kiss on Nova's cheek.

But in one of the pictures where Mbangeni is wearing a vest that exposes her ample arms and cuddling Nova, some fans took a swipe at her "unflattering", "big" and "ugly" arms.

Mbangeni told Sunday World that she was unfazed by the body-shaming as it had become part of the nature of people on social media to ridicule others.

"It's sad but it has become part of our lives. It's even sad to see women ridicule each other," she said.

Despite the criticism, some fans came to Mbangeni's defence, insisting that the very same haters would have still seen fault if Mbangeni's arms were photo-shopped.

Mbangeni added that people should first think about the harm they cause to others through the nasty comments they make on social media.

"I think it's high time that people invest their insults and anger towards building the nation. They should start by buying our music as artists instead of pulling us down. We should emulate the Americans who make their superstars."

She acknowledged that she and Nova had become "close" ever since working on the song and performing it together countrywide.

"And while we both appreciate the overwhelming support from fans, I don't think the support is enough for us to owe anyone any explanation about our private lives. As a mother, I always guard against exposing my private family life to the media," she says.

Describing herself as a "tough cookie", Mbangeni said she knows that the Mzansi entertainment industry scene was not for the faint-hearted and that "one needs to rise above torment and devastation that we face every day".

The outspoken Mbangeni recently made an impassioned plea to trade union federation Cosatu during the May Day celebrations to monitor working conditions in the creative industry.

She reiterated her stance to Sunday World: "Many artists continue to suffer silently at the hands of unscrupulous music promoters. Something needs to be done to protect artists."