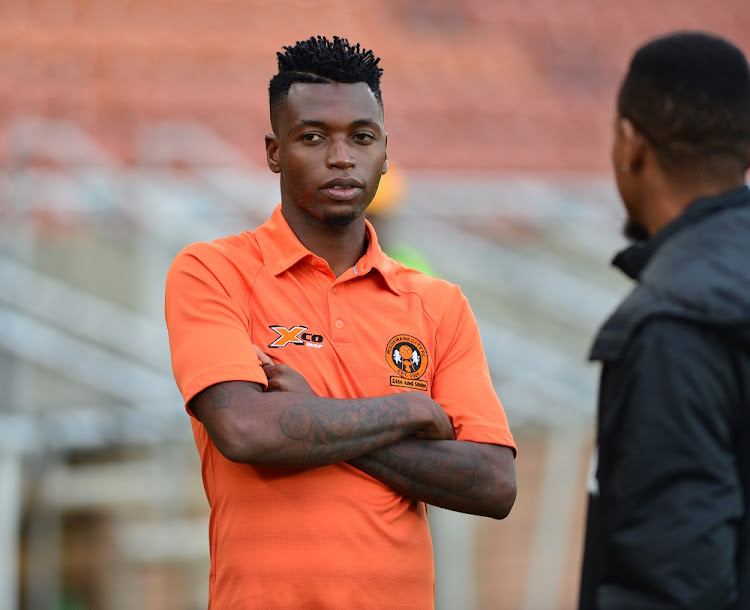 Walter Musona of Polokwane City has found himself on the wrong side of the law after his car was used to carry out a robbery.
Image: Philip Maeta/Gallo Images)

Polokwane City striker Walter Musona has been flagged offside by the law after his car was involved in a daring armed robbery in Sekhukhune, Limpopo on Friday.

The soccer star was dragged to the Apel police station for questioning after a high-speed chase with the police that involved his BMW sedan.

According to police, one of the employees at the Mohlaletse Guest House was shot and injured after the thugs pounced shortly after midnight and overpowered security guards.

However, one of the guests who heard the commotion managed to call the cops who arrived after the robbers had cleaned the place of all TVs, computers, CCTV camera equipment and cellphones.

A car chase ensued and the fleeing robbers hit a tree, abandoned the German sedan and fled on foot.

Police spokesperson Moatshe Ngoepe confirmed that a case of business robbery was opened and the Zimbabwean footballer was questioned.

"[We] ... have launched a massive manhunt for a group of armed suspects involved in a business robbery which occurred in the early hours of May 10 at about 1am.

"It is alleged that a group of suspects attacked the employees at this overnight accommodation, shot one of them and ransacked the building. The suspects thereafter uninstalled the Plasma TVs from the walls, loaded them inside their vehicle and stole several other electrical appliances before they fled the scene with a BMW sedan, white in colour," he said.

Ngoepe said after the car crashed, the police searched it and a "number of items believed to be the ones stolen during this incident were recovered".

"The recovered motor vehicle used by these suspects was positively identified. It belongs to one of the national soccer players. The player is not arrested yet pending further police investigations. Preliminary police investigations revealed that he was not in the car during this incident but he is co-operating with the police to track down the suspects, one of whom has already been identified," he said.

The owner of the guesthouse, Isaac Mampuru, said he was shocked to be called just after midnight and asked to go to the crime scene. Mampuru said the thugs got in through the fence at the back of the property and immediately went to the guardroom and intimidated their security guard.

"They then asked him to use his walkie-talkie and ask the receptionist and other staff members to come out. That's when they held all of them hostage. They continued to the reception and took the TV and keys to all rooms," he said.

Polokwane City spokesperson Tincy Pena said they were not aware of the incident.