ANC in charge with reduced majority 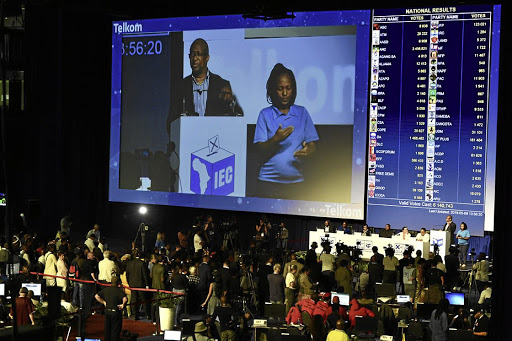 The ANC is set to remain in charge of the national government, albeit with a declined majority in parliament.

After 99.88% of the national votes had been counted yesterday, the ANC had garnered 57.50% at the national polls. This represents a decline of 4.65 percentage points from the 62.15% it obtained in the previous general elections in 2014.

The outcome means the ANC will see its majority in the National Assembly - or the number of its MPs - declining to about 230 from the 249 seats it secured in 2014.

The DA, for the first time since 2004, will see its growth trajectory take a knock. The opposition party, which has enjoyed a growth in national support of between four and six percentage points in every election over the past 15 years, is now set to drop in support.

It is expected that the sixth parliament will see more red overalls and berets among its seats when it convenes for a swearing-in ceremony on May 22.

At provincial level, the EFF is now the official opposition to the ANC in Limpopo, Mpumalanga and in North West.

ANC deputy secretary general Jessie Duarte says the party needs to "go back to basics" in Gauteng where it received a slim majority of 50.19% at the ...
News
3 years ago

Rather unsurprisingly, the DA emerged victorious in the Western Cape, with 1.1-million votes (55.45%) marked - almost double that of its nearest competitor the ANC, which came in at 28.64%. However, both parties suffered a decline in support in the province compared to 2014.

The IFP saw an impressive 5.48% boost in its support in KwaZulu-Natal, bringing its total to 16.34%. This means that the party has unseated the DA as the official opposition to the ANC, which mastered 54.22% in the province - a 10% drop since 2014.

The ANC has taken a ‘glass half full’ approach to its analysis of the results from Gauteng, saying it views the results as an increase in support and ...
News
3 years ago

KwaZulu-Natal is the second province after Mpumalanga, where the DA has lost its position as the official opposition.

There was a similar trend in the Free State, where the ANC finished on 61.14%, well ahead of the DA on 17.58% and the EFF on 12.58%. Both opposition parties saw steady growth in the province compared to 2014, while the ANC experienced a 8% decline.