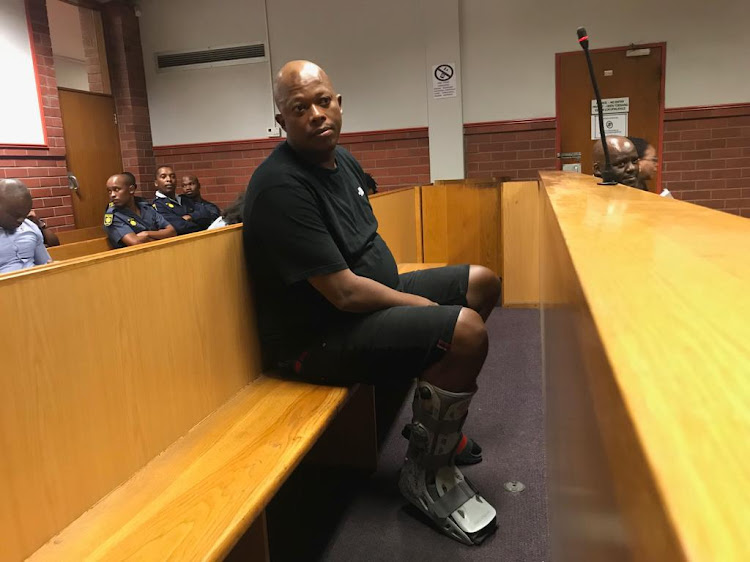 Mandla 'Mampintsha' Maphumolo appears in court with a cast on his right leg
Image: Yasantha Naidoo

Queen of gqom Babes Wodumo was accused of being a "s**be" (slut) by her boyfriend Mampintsha before he allegedly assaulted her during a domestic violence tiff at his Westville, Durban home a fortnight ago.

The tidbits were contained in the police statement Babes Wodumo, real name Bongekile Simelane, deposed at the Westville police station.

Babes Wodumo's alleged assault by Mampintsha burst onto the public domain after a live Instagram video update on her account.

While Mampintsha, real name Mandla Maphumulo, publicly narrated his version of events, the Wololo hitmaker has never spoken publicly about the genesis of the beef that led to her alleged assault.

But in the statement, which Sunday World had seen, the pantsula dance goddess said Mampintsha accused her of being a slut when she arrived at his Westville home from work at about midnight.

She said Mampintsha, who was resting on the bed told her to leave him alone as he wanted to sleep. "He stood up from the bed and said 'uphumaphi wena s**be' (where have been, you slut)? She replied by saying 'ngiphuma emsebenzini nje' (I'm from work)," reads the statement.

Babes Wodumo said Mampintsha slapped her on the face and pushed her onto the bed. When she cried and screamed, he allegedly took his sling bag and stormed out of the house.

She said she called the police who arrived at the scene as he boarded an Uber. "Mampintsha was arrogant and said to the police 'niyangifaka evenini noma cha?' (are you going to bundle me into the police van or not?) and he walked away into Uber (sic)," reads the statement.

Babes Wodumo put down the phone when approached for comment.

Mampintsha, who was arrested and released on R2,000 bail for the alleged assault, couldn't be reached for comment.

But in his police statement, Mampintsha said it was in fact Babes Wodumo who moered him first and that he was acting in self defence. He said he was asleep in his bedroom when Babes Wodumo, whom he accused of being drunk, hit him with a sandal on the lower lip.

Police spokesperson Vishnu Naidoo declined to comment as the matter is sub judice.

Meanwhile, musician Mampintsha posted a public apology to Babes Wodumo and said he would also attend counselling sessions to deal with his demons. In a statement Mampintsha posted on Facebook yesterday, Mampintsha wrote a heartfelt apology also apologising to the music fraternity and South Africans for assaulting her. The statement partially reads: "South Africa, I'm sorry. I know many of you don't want to hear it kodwa from the bottom of my heart I send my deepest & humblest apologies," adding that he was ashamed.

Mampintsha blamed his actions as being the work of the devil and that since the incident he has turned himself to the Lord. "I'm really sorry and regret everything please forgive me," reads the statement.