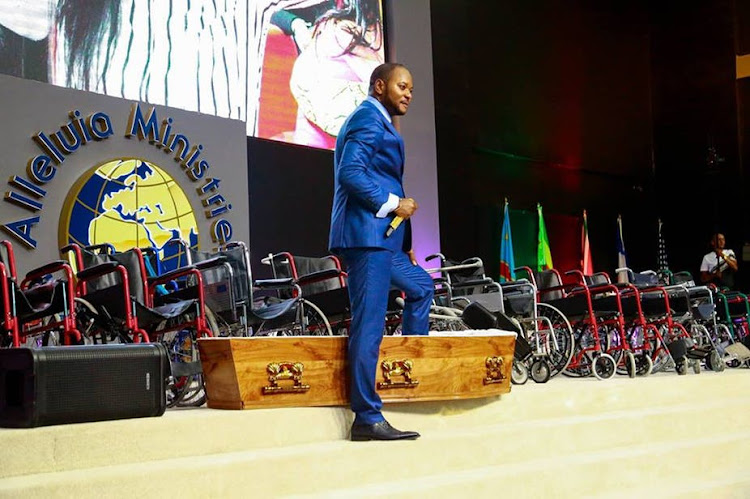 Pastor Alph Lukau's Alleluia International Ministries will pay you R3,500 to pretend you are crippled during one of his church services.

That is what "Grace" from Nellmapius, Pretoria, claimed on Tuesday evening in an interview with SABC's Cutting Edge. The latest episode investigated the recent "resurrection" of Brighton "Elliot" Moyo on February 24 which pushed Lukau into the headlines. Moyo has also lived in Nellmapius for the past two years.

"Grace" said: "They said you recruit someone, you get paid R150. If maybe you act as a cripple and then you get R3,500. They don’t want the South Africans, because the South Africans they can trace very easily, but the Zimbabweans, they are unsearchable."

"Nelly" from Nellmapius said: "They said if you are not scared of a rat or snake, the pastor will shuffle it in your clothes and when he preaches he'd describe the colour of your outfit, he would then lay his hands on you during prayer, the rat or snake would come out and people would start giving money.

"Paul", Moyo’s friend and compatriot, said he last saw Moyo on the February 21, the day before he supposedly died.

"He never died, he was also never sick, he left on Thursday. They only act to get paid and make ends meet."

Moyo's boss, Vincent Amoretti, said some of his colleagues said Moyo has done "a wheelchair stint and a couple of other stints with the same church".

Former congregant Samantha Revesai started working for the church to make ends meet when she was unemployed. She claimed she was paid R1,500 a month to stick to her story that she was HIV-positive for three years before she was "cured" by the church.

"I was not [HIV] positive. I've never been. They wanted me to act as if I was positive and then the pastor prayed for me."

Gauteng EMS's (Emergency Medical Service's) JP von Benecke said the service had  received no call to inform them of Moyo's death nor had seen a death certificate.

"You will be declared dead by a paramedic. You will then go to an undertaker. The undertaker will get a medical doctor to do a certificate of death," he said.

George Dlodlo from Black Phoenix Funeral Parlour said: "We never had a deceased [person] here … He didn’t pass by here."

Bishop Paul Verryn from the Methodist Church of SA called the scam a human rights violation.

"Because it takes place under the name of what we call so-called churches, they're not any different to some crazy cult," Verryn said.

"I can go and start some kind of crazy band somewhere and in the name of Jesus get you into such a pickle in your head that you no longer know the beginning from the end."

Commission for the Promotion and Protection of the Rights of Cultural‚ Religious and Linguistic Communities (CRL) chair Thoko Mkhwanazi-Xaluva called the situation chaotic.

University of Johannesburg religion expert Maria Frahm-Arp said the "resurrection" stunt gained momentum because "the public is desperate for miracles".

Incredible Happenings' Pastor Paseka "Mboro" Motsoeneng on Wednesday condemned Lukau’s ministry for his "gimmicks and stunts which bring Christianity into disrepute" in the aftermath of the documentary.

"What disturbed me the most is that South Africa has made significant strides in cultivating a culture of safe sex and for HIV positive citizens to consistently take their medication. How many people stopped taking their medication when they saw these Lukau fake miracles? How many young people went on to disregard the safe sex gospel - thinking that HIV is now that easily curable?"

Alleluia International Ministries spokesperson Busi Gace condemned the allegations that the "miracles" were staged as "ridiculous".