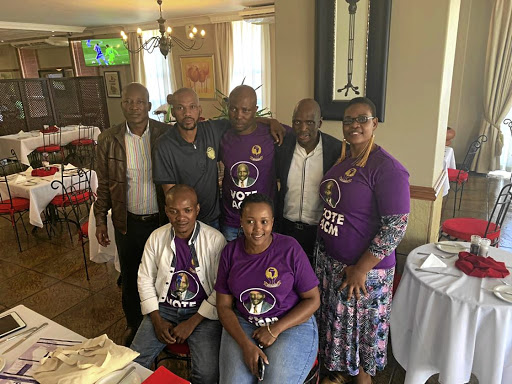 This comes after the party was joined by former President Jacob Zuma's allies and leaders of Mazibuye African Congress and its approximately 300,000 members across the country.

Sunday World can reveal that the party's national leaders took a decision to collapse their organisation last week during one of their meetings in favour of joining Motsoeneng's ACM .

However, it has been established that the decision follows a string of resignations of the party's national leaders among them, national chairperson, deputy secretary-general and treasurer, allegedly over political differences with the party's president, Reggie Ngcobo.

The party, which was formed by ANC members who were unhappy with the ANC's decision to recall former president Zuma from office, has confirmed joining forces with ACM.

Mazibuye's former general secretary Romeo Matjila said the move was necessary as it would boost ACM's chances of making a good showing at the polls in May 8.

"We are a fairly new party, and we had to look for other parties with the same views as ours, and we just saw ourselves in Motsoeneng's party," he said.

He said his party was sold on ACM's economic transformation policies because of Motsoeneng's record and achievements while he was the chief operations officer at the public broadcaster.

Hlaudi Motsoeneng has used yet another funeral of a late musician to turn attention to himself.
News
3 years ago

"He delivered the 90/10 local content policy which benefited black people, and he was also at the forefront of programmes aimed at empowering the black majority. As a pro-black party, we found it easy to relate with him and the party he leads as we share the same objectives and vision of radical economic transformation," he said.

Matjila said before taking the final decision, they had also written to Andile Mngxitama's party Black First Land First (BLF), but the party did not respond on time.

He confirmed that the decision was taken after the party had experienced leadership challenges at national level.

"However, all those issues are now resolved, and the decision to join ACM was a collective decision," he said.

Matjila further said that their decision now meant that Motsoeneng's party stood to benefit in terms of membership citing that their 300,000 strong members from their two stronghold provinces, including KZN and North West, were now officially part of ACM.

Matjila said they did not join ACM with expectations to be rewarded with positions.

"If it was to happen it would be the decision of the president of ACM as to what role we can play in the party," he said.

Matjila confirmed that Mazibuye had a good relationship with Zuma, and said the former president was informed about their decision to join Motsoeneng's party.

"He told us that he would have preferred us to rejoin the ANC, but we explained to him why we opted to join Motsoeneng and he understood and said he supported our decision," said Matjila.

Motsoeneng confirmed that his party has welcomed Mazibuye members to its ranks, and labelled the move as a game changer for his party and politics of the country.

"This move makes us the fastest-growing party in the country at the moment. I knew from the onset that many emerging parties will at some point fall under the ACM.

"When people vote, they vote for someone who has a track record in service delivery, and Mazibuye leaders know what the leadership of ACM stands for," said Motsoeneng.